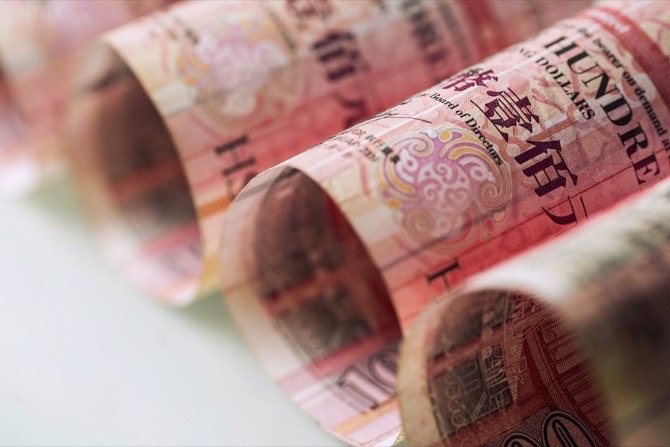 Hong Kong faces the likelihood of rising borrowing costs after the city’s de facto central bank intervened to defend its currency peg for the first time since August.

The Hong Kong Monetary Authority bought HKD1.51 billion (USD192 million) of local dollars during London and New York trading hours after the currency fell to the weak end of its trading band, it said in a statement Saturday. The move will reduce the aggregate balance, a measure of interbank liquidity, to a decade low of HKD74.8 billion.

While the size of the buying was small relative to some of the HKMA’s interventions last year, continued weakness in the currency may prompt the central bank to drain more liquidity. That would intensify pressure on home values in the world’s most expensive property market, and weigh on the city’s economy. Just 11 months ago the aggregate balance stood at about HKD180 billion.

“The Hong Kong dollar will remain under pressure in the near term, so the local authorities will intervene further to defend the peg,” said Irene Cheung, a senior strategist at Australia & New Zealand Banking Group. “Interbank borrowing costs will rise gradually due to the liquidity drainage, but they won’t spike as the scale of intervention will be smaller compared with last year.”

The Hong Kong dollar was little changed at HKD7.8497 per greenback as of 5:18 p.m. local time. The three-month interbank borrowing costs on the currency, known as Hibor, climbed the most since December, while the one-month tenor rose to the highest since Jan. 10 on Monday.

So far, the government – which spent years unsuccessfully trying to cool the housing market as the U.S. held borrowing costs near zero – appears sanguine about the prospect of tighter liquidity.

The outflow of funds from the Hong Kong dollar is an “inevitable process” as the monetary environment normalizes, HKMA Deputy Chief Executive Howard Lee said in the statement. He said it wouldn’t be surprising if the Hong Kong dollar again weakened to the bottom of its trading band, and the HKMA “stands ready” to defend it.

Hong Kong effectively imports U.S. monetary policy thanks to the currency peg, even if local rates don’t always track those across the Pacific.

While last year’s interventions helped the one-month Hibor climb to a decade-high of about 2.4 percent in December, the cost of borrowing has tumbled recently. The rate fell to as low as 0.91 percent in February, compared with 2.49 percent for U.S. Libor. The gap makes it profitable to short the Hong Kong dollar, which has been near the weak end of its band for weeks.

Abundant liquidity in the currency market, weak demand for loans and a lack of large-scale initial public offerings in Hong Kong have contributed to the rate gap, Lee said.

More intervention is possible, though the security of the peg isn’t in doubt, said Bipan Rai, head of North American foreign-exchange strategy at Canadian Imperial Bank of Commerce.

“Reserve levels have been built up significantly over the past decade and the HKMA still has an ample amount of reserves to defend the USD/HKD range for now,” Rai said. “It’ll likely be tested a few times, which may see further intervention. But any talk of the peg giving way is an extreme long shot.” Richard Frost, Tian Chen, Bloomberg