Hong Kong to close bars, nightclubs from tomorrow due to virus 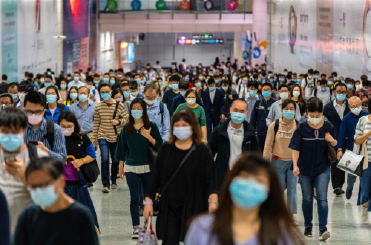 Hong Kong will shutter bars, nightclubs and bathhouses from tomorrow until Dec. 2 as concerns rise about a new wave of Covid-19 cases in the Asian financial hub.
The government will also cap the number of tables allowed at banquets at 10, with four people allowed per table, Hong Kong Secretary for Food and Health Sophia Chan said yesterday at a briefing. The four-per-table rule at restaurants and mandatory mask-wearing would remain in place, she said, and the government would urge employers to allow work-from-home arrangements.
Chief Executive Carrie Lam said that Hong Kong would shutter more indoor entertainment venues as cases rose. She’s scheduled to deliver her delayed annual policy address today.
“The direction is to cover this kind of premises because according to the WHO, we have to avoid three things: Avoid closed areas, avoid crowds – the ‘three C’s’ – and avoid close contacts,” Lam said at a weekly briefing.
Hong Kong reported 80 coronavirus cases on Tuesday, the most since Aug. 7, including 10 that were of unknown origin, according to Department of Health official Chuang Shuk-kwan. Concerns are rising about a new wave of infections in a city that has largely avoided major outbreaks seen elsewhere in the world.
“Unfortunately we see a rebound, so we need to do our best to keep it under control,” Lam said. Still, “we have to look at it globally because this is a global pandemic,” she added. “Hong Kong is not doing bad at all.” MDT/Bloomberg