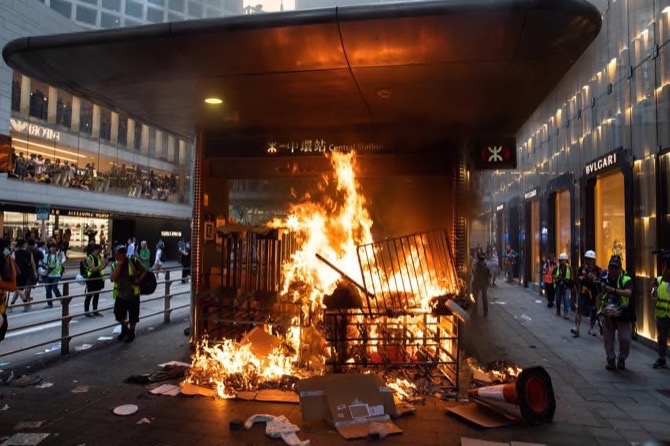 From Sydney to Stockholm, governments looking for help with their rail systems turn to Hong Kong’s MTR Corp., renowned for its speedy, clean and reliable commuter trains.

That polished image is now tarnished at home, as months of unrest frequently boils into violence and vandalism on Hong Kong’s subway. MTR facilities have looked more like battlefields on some weekends. Protesters have smashed windows at stations and set a fire blazing outside a station in the main business district. Police have fired pepper spray and been seen beating people aboard a train. Black-clad activists have protested at MTR-owned shopping centers and obstructed services on the network, which has more than 90 stations.

For many activists, MTR has become an antagonist, working with the government and the police to suppress their pro-democracy movement by closing stations and preventing people from going to and from protests.

“They are sacrificing passenger safety for the police,” said Katherine Chau, a 26-year-old airport worker who has taken part in protests, now in their 15th weekend. In early September, she began jumping over MTR turnstiles rather than paying as a way of opposing the broader system.

This has turned into a challenge for a new leadership team struggling to maintain MTR’s expansion abroad while also containing the damage from a 2018 construction scandal that severely damaged its reputation in Hong Kong.

Overseas, MTR operates rail networks in Australia, Sweden and the U.K. Closer to home, the company runs trains in mainland China and will operate a light rail system scheduled to open soon in Macau.

MTR’S Chief Executive Officer Jacob Kam has been on the job since April and Rex Auyeung became chairman in July. They have to contend with weekly crises as clashes between demonstrators and the police repeatedly cripple the network’s busiest arteries. The pair also face revenue declines from a slowing economy. Cathay Pacific Airways Ltd. on Sept. 11 reported its biggest drop in passenger traffic in more than a decade, a bad sign for a company like MTR that counts on tourist spending, according to to Michael Wu, a Hong Kong-based analyst with Morningstar Inc.

“The Airport Express line is going to be hit the hardest since it’s very tourism-driven,” Wu said.

MTR did not respond to requests for comment on the business impact of the unrest. In a statement on Sept. 8, the company said it condemns the violence and closes stations only “as a last resort for the sake of staff and passengers safety.”

MTR has taken heat from both sides of the conflict. While anti-government protesters target the company, China’s state-owned media also issued blistering attacks last month, when MTR was running additional trains to accommodate a surge in demand from people participating in demonstrations.

“MTR operates exclusive train for violent protesters,” the official Xinhua News Agency said in an Aug. 22 tweet. “MTR, a means of public transport? Or an accomplice to rioters?”

On the weekend of Sept. 7 and 8 alone, MTR closed seven stations, including major interchanges such as Prince Edward. On Sept. 8, a fire blazed outside Central station in Hong Kong’s main business district.

In an open letter to MTR passengers released on Sept. 8, the two top officials criticized violence and vandalism, which they said threatened the safety of MTR staff. The letter didn’t refer to concerns protesters have raised about the company’s cooperation with the government and police.

“At this crucial moment, we wish all sectors of the community could treasure and safeguard this railway network which has been carrying our collective memories over the past few decades,” Auyeung and Kam wrote.

The beleaguered train operator has one major advantage: a captive market that depends on its transportation network. Despite the weekend disruptions, the metro system still operates as usual most of the time, serving millions of passengers a day.

“You may see a reduction in ridership, but the general public is still going to be using the mass transit system,” said Ralph Ng, a Moody’s Investors Service analyst.

Beyond the protests, the operator faces more difficulties. Kam and Auyeung took charge as part of a housecleaning effort following alleged safety violations caused by a contractor’s construction shortcuts on a long-delayed new line between Shatin, a suburb in the New Territories, and the Central district. A government investigation is ongoing and MTR is in discussions with authorities on a settlement, the company said in a July 18 statement. MTR in July set aside HKD2 billion ($256 million) to provide for costs associated with the Shatin-Central project.

Overseas, a Stockholm commuter train service that the company manages “will likely remain in a loss-making position for a few years,” MTR said in a mid-year report published on Sept. 4. A joint venture in the U.K. with FirstGroup Plc in 2017 began operating between London and southwestern England, but MTR announced in May a provision of 43 million pounds ($53 million) to cover potential losses.

Even with its diversification, MTR still depends on Hong Kong for about 60% of its revenue, so the turmoil at home will continue to weigh on its prospects.

Until Lam’s government finds a way to end the crisis, protesters are likely to keep targeting the train operator.

“MTR is the easiest venue for people to revolt,” said Chau, the turnstile jumper. “Ninety percent of the population uses it.” Bruce Einhorn  & Shawna Kwan, Bloomberg