A top Chinese official visiting Hong Kong warned against heeding calls for independence for the semiautonomous Chinese region.
Zhang Dejiang, who is the Communist Party’s No. 3 official and responsible for Hong Kong affairs, made his remarks at a dinner banquet attended by senior city government officials and business leaders.
Zhang is making a three-day “inspection visit” to the former British colony, where discontent is rising over Beijing’s tightening grip on the city. Tension remains high two years after Beijing said it would not allow unrestricted elections for the city’s top leader, a decision that sparked pro-democracy street protests that brought parts of the city to a standstill for 11 weeks. Some radical “localist” groups have recently started calling for greater autonomy and even independence for the specially administered Chinese region. 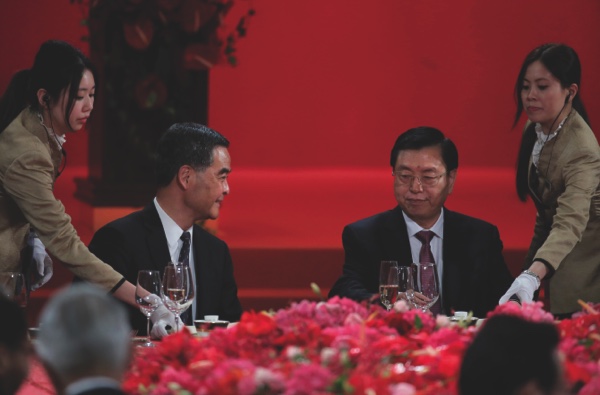 “There are a very small number of people rejecting ‘one country’ and resisting the central government. They’re even flying the banner of Hong Kong independence,” Zhang said. “This is not a matter of localism, but it’s separatism under the name of localism.”
Zhang also warned people not to break the law, but did refer to any specific offenses.
“No one can override the law, and no offenders can evade legal jurisdiction with any excuse,” he said. “Society should severely condemn those actions which challenge the rule of law.”
He said the “one country, two systems” framework, under which Beijing allows Hong Kong a high degree of control over its own affairs and civil liberties unseen on the mainland following its 1997 handover from Britain, is in the city’s best interests.
Hong Kong authorities have ratcheted up security for Zhang’s visit, with as many as 8,000 police officers deployed for the visit, the South China Morning Post newspaper reported, citing an unidentified police source. Water-filled plastic barriers and metal barricades ring the hotel and conference center where Zhang is spending much of his time. Paving stones have been glued together to prevent protesters from throwing them, construction work has been suspended, and some shops and restaurants have shut temporarily.
Earlier in the day, a group of about 100 protesters who tried to get close to the business conference where Zhang was delivering a speech were kept well away in a designated protest zone.