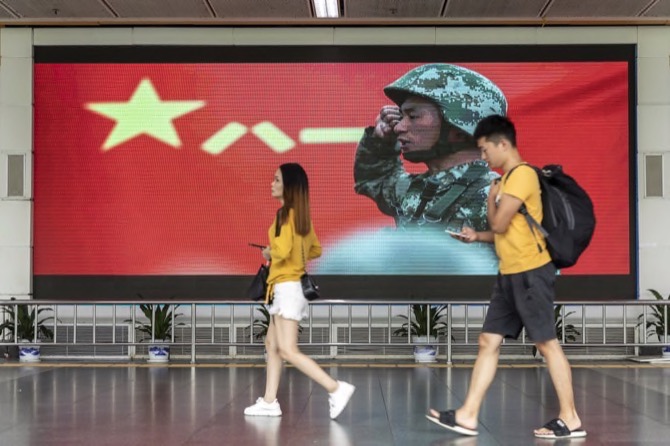 China has lots of weapons to deploy to bring Hong Kong’s protesters under control before it needs to send in the troops.

From barring dissident flight attendants to encouraging “patriotic” citizens to confront protesters on the streets, China has unloaded a wide range of firepower against the city’s fractious opposition in recent weeks. That’s to say nothing of the considerable sway Beijing holds over local politics, with its own loyalist bloc in the elected legislature and veto power over all top appointments.

Here’s a look at some of the tools in China’s arsenal:

While Chinese officials continue to reaffirm their commitment to Hong Kong’s “high degree of autonomy,” they’ve begun to pull the levers of power more directly since some radical protesters attacked the central government’s local headquarters and other symbols of Beijing’s authority. The Hong Kong and Macau Affairs Office – China’s top agency overseeing the city – has held an unprecedented three briefings on the protests and summoned local representatives to a closed-door meeting in Shenzhen, where attendees say officials batted away appeals for compromise.

The moves demonstrate the Communist Party’s ability to reach deep into the city’s politics without resorting to military force, even if they reinforce arguments that local control is being eroded. China has also lodged formal diplomatic complaints with countries that have supported the protests, accusing the U.S. and the U.K. of meddling.

China has repeatedly shown its willingness to use its leverage as the world’s largest trading nation to express political displeasure, as South Korea, Canada, Norway and others can attest. Hong Kong, which conducts more than 40% of its trade via the mainland, is particularly vulnerable. Last week, Rupert Hogg resigned as Cathay Pacific Airways Ltd.’s chief executive officer after China’s regulators banned all crew who participated in “illegal demonstrations” from mainland flights.

Even if Beijing has no intention of deploying troops, it can unleash a vast state-run media apparatus to raise fears that it might. Chinese media have circulated photos and news reports of Chinese troops and paramilitary riot-control forces training in scenarios resembling Hong Kong’s protests. The government’s claims that the protests are the product of foreign “black hands” such as the U.S. and the U.K. are widely circulated, helping lay the ground for any more direct intervention.

Moreover, the uglier parts of the protests, such as petrol bombs thrown at police stations or the defacement of national emblems, are amplified for most of the mainland’s 1.4 billion citizens. Reports frequently compared the protests to “terrorists” and “rioters” – a label used to justify the Tiananmen Square crackdown in 1989. Beijing’s nationwide censorship system known as the Great Firewall helps ensure that developments that might generate sympathy for the movement, including outbreaks of beatings by triad-linked mobs, go largely unmentioned.

Long before regaining control over Hong Kong in 1997, the Communist Party had built a deep support network that it can call for support in times of trouble, including business groups, labor unions, neighborhood associations and several pro-establishment political parties. This “United Front” plays a key role in organizing counterprotests to support the police and the government, events that receive favorable play in the city’s numerous Beijing-aligned commercial media outlets.

The growing global reach of such groups – ostensibly aimed at overseas Chinese – has drawn accusations of political meddling in places such as Canada and Australia, where they’ve turned out to oppose causes disputed by Beijing. But they’ve helped China counter rallies organized around the globe to support Hong Kong’s protests, seen by clashes in Sydney and Melbourne on Friday. Canadian police escorted worshipers out of a Vancouver church on Sunday, after Beijing supporters surrounded a prayer meeting for Hong Kong.

While the Hong Kong and Macau Affairs Office has urged an end to all violence in the protests, the agency has also urged Hong Kong residents to “stand firm and guard our beautiful homeland” and warned demonstrators that “those who play with fire will perish by it.”

Such comments have fueled concern that Beijing is at least tolerant of other, more aggressive moves against protesters. In recent weeks, groups of stick-wielding men, often dressed in matching white shirts, have turned out on the streets to assault protesters, occasionally striking passersby in the process. People have shot fireworks at rallies from passing cars. Yesterday, a man was arrested while attempting to enter the mainland in connection with a knife attack on three people near a protest message wall.

The protesters and opposition lawmakers have blamed the attacks on notorious Chinese organized crime gangs known as triads, and police said that several people with links to the groups were among those arrested after one particular shocking attack last month. They’ve accused the police of colluding with the gangs, something the local government has denied. MDT/Bloomberg