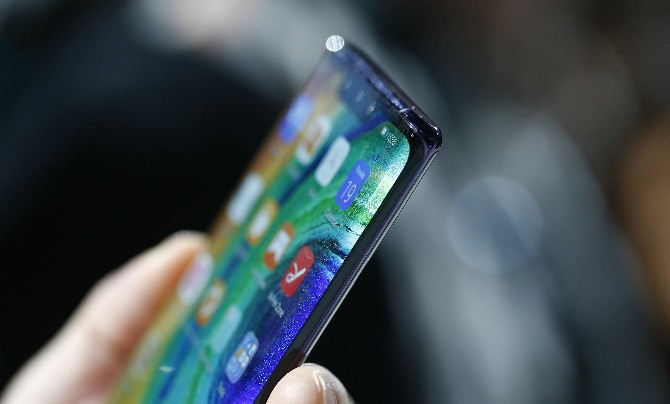 Huawei Technologies Co. is bracing for its most difficult year on record in 2020, when tightening U.S. sanctions and the Covid-19 pandemic threaten to slam an already slowing business.
Rotating Chairman Eric Xu said he’s aware of the potential for Washington to tighten restrictions on the company, including by stopping Taiwan Semiconductor Manufacturing Co. from selling chips to Huawei. The Chinese government wouldn’t tolerate such action and it would irrevocably damage the global supply chain, Xu said in some of Huawei’s strongest comments against the Trump administration’s measures so far.
“If the Pandora’s box were to be opened, we’ll probably see catastrophic damage to the global supply chain – and it won’t just be one company, Huawei, destroyed,” Xu told reporters after unveiling 2019 earnings. “I don’t think the Chinese government will just watch and let Huawei be slaughtered on a chopping board. I believe the Chinese government will also take some countermeasures.”
China’s biggest tech company remains in Washington’s cross-hairs even as Covid-19 spreads across the globe. The White House is reportedly considering imposing restrictions on the sale of semiconductors to Huawei by global corporations such as TSMC and Samsung Electronics Co., a move that would effectively deprive the Chinese giant of the most advanced chip technology. That would escalate already damaging restrictions on Huawei, which yesterday reported net profit grew 5.6% – the slowest pace of bottom line growth in three years.
“Why can’t China ban the use of American 5G chips, base stations, smartphones and other smart devices based on the same network security reasons?” Xu said, adding he couldn’t confirm reports about curbs on TSMC.
Huawei had previously reported sales growth of about 19%, to 859 billion yuan ($123 billion) in 2019, roughly the same as in the previous year. And the Shenzhen-based company’s profit improved to 62.7 billion yuan. But Xu said 2019 was its most difficult year yet, when it was forced to transform its business after expansive scrutiny and sanctions from the U.S. The effort to contain Huawei – and by extension, China – forced the company to turn inward.
The Trump administration’s campaign to get allies such as Japan and Australia to shut out Huawei gear and phones helped drive sales in the Asia-Pacific down 13.9%, though that was more than offset by a surge at home in China.
In the fourth quarter alone, which was most impacted by the U.S. prohibition on Huawei selling Android phones with Google’s mobile services, the company shipped roughly 55 million devices, calculated from the difference between its September shipments update and the year’s total. Of the 240 million Huawei and Honor phones shipped, 6.9 million had fifth-generation wireless networking, an area where the company remains a tech leader.
Contrary to warnings from American lawmakers and diplomats, numerous European countries like the U.K. and Switzerland have opted to use Huawei’s technology in building out their 5G networks. The U.K. and Germany have both echoed U.S. concerns about how far Huawei can be trusted with key infrastructure of the future, but those have not extended to the severity of an outright ban. MDT/Bloomberg