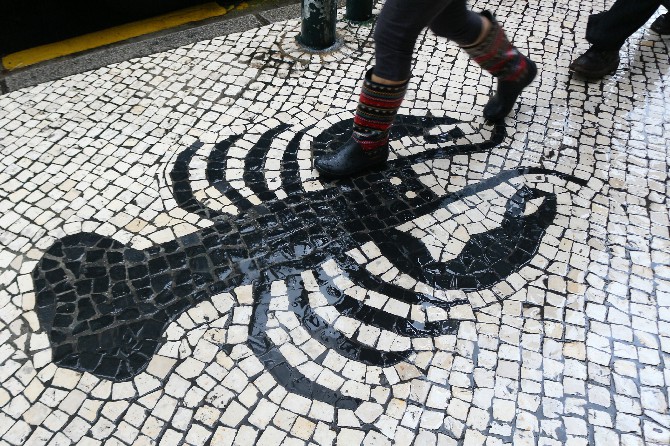 The Municipal Affairs Bureau (IAM) has pledged to keep the traditional Portuguese cobblestone pavement in the public spaces of Macau, the bureau said in an official statement.
The statement reversed last week’s intervention by president José Tavares, who during IAM’s advisory council meeting stated the possibility of the replacement of the traditional cobblestone pavement for a new pavement made of bricks, which, according to the president, would be less slippery and allow for better drainage of rainwater.
Now the IAM has reaffirmed that the bureau will continue to maintain the Portuguese pavement used in most of the public squares as well as some sidewalks in Macau, namely in the historical center, noting that the bureau “aims to safeguard its symbolism and highlight its characteristics [representative] of the coexistence of Eastern and Western cultures.”
Besides keeping the existing Portuguese cobblestone pavements, IAM also voiced its intention to continue to pave several public spaces and streets with this type of pavement, namely linking neighborhoods and tourist spots.
IAM also noted that the opinions previously provided by citizens and members of the advisory council, such as the potential risks coming from the unevenness and slippery surface of the pavement, will be taken into account by the bureau. The bureau will evaluate the conditions and promote improvements on several locations “whenever conditions permit.”
IAM also mentioned that the use of Portuguese cobblestone pavement in Macau is one of the highlights of the region in terms of urban design.
The bureau noted that the areas now paved in this method possess unique characteristics, displaying both Portuguese and Chinese features that highlight the heritage of Macau, and are attractive for tourists.
In 2018, two local scholars, Vanessa Amaro and Sheila Zandonai, published a research paper in the Current Anthropology Journal from the University of Chicago emphasizing the unique characteristics of the Portuguese pavement in Macau. They noted how the pavement had been converted into an item of cultural significance.
In the paper, the researchers addressed the implementation of the pavement over time, and the evolutionary process from the colonial past, in which the use of the pavement provoked resistance and animosity from the Chinese population, to contemporary times, where it has been accepted and regarded as part of Macau’s cultural identity.