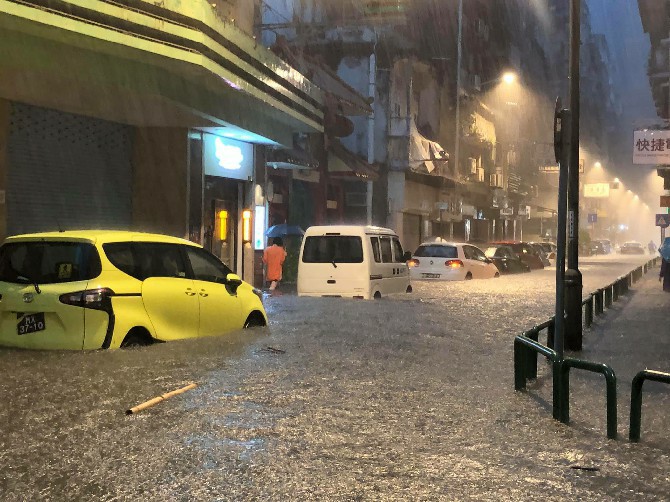 The Municipal Affairs Bureau (IAM) will formulate a plan to construct a new rainwater pumping station at Baía Norte do Fai Chi Kei to alleviate flooding in the city.
According to a statement by the IAM, the construction is titled EP9. The infrastructure will be built with a box culvert, which will be used to divert rainwater to Baía Norte do Fai Chi Kei for discharge into the ocean.
The pumping station will help discharge excess rainwater into the ocean to mitigate chronic flooding issues in low-lying areas like Avenida de Horta e Costa, Fai Chi Kei and San Kio, IAM stated.
The IAM is now awaiting feedback on the technology for the construction from the relevant department.
According to an official document, the IAM announced plans to erect a rainwater pumping station at Fai Chi Kei as early as 2014. However, the construction project has not been delivered so far.
The long-overdue project prompted lawmaker Lei Chan U to file a written interpellation questioning the authorities about the construction progress and timeline.
Lei’s complaints came after a heavy rainstorm hit the city around midnight on June 1, leading most low-lying areas to become severely flooded and meaning many locals were wading in the flood water on the streets in the early morning.
Following the storm, the Chief Executive (CE), Ho Iat Seng, said the unpredictable weather conditions were to blame for the flooding.
In the Macau Peninsula, around 90% of rainwater is discharged into the ocean through a system of about 100 drains. The remaining 10% is discharged via the three pumping stations into the sea, Lei added.
However, the new pumping station at Fai Chi Kei, had it been erected, would have helped to lessen the impact of the severe flooding on June 1.
The city’s chronic flooding was predominantly caused by the insufficient sewer discharge capacity in some old districts, such as Inner Harbor.
Lee asked the authorities whether there are other approaches to rectify the city’s deficient drainage system in the pipeline.
In response to this, IAM said it has several plans to expand and decongest existing sewers.
The IAM also stressed that it has established a remote monitoring and control system for real-time observation of rainwater pumping stations and outlets. Meanwhile, IAM has launched a CCTV monitoring system to scrutinize the sewer conditions.
The IAM pledges to conduct the clearing works on sewers in phases, and will direct its focus on resolving the clogged sewers.