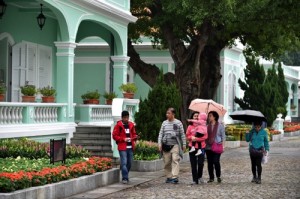 Macau’s attempts at cultural heritage preservation has paid off and the territory is becoming an open-air museum, according to Ung Vai Meng, president of the Cultural Affairs Bureau (IC).
In an interview with Xinhua ahead of the SAR’s 15th anniversary celebrations, Ung said the best thing that has ever happened to him was the chance to witness Macau’s impressive transition from a city in decline to a flourishing “cultural heritage capital.”
Ung, 56, began his career in 1983 when he and his colleagues worked to promote the concept of historical site preservation among the local people.  However, they were often frustrated as most people had a limited understanding of cultural heritage preservation at that time. “The residents were confused. They asked why such shabby houses should be protected,” Ung said.
According to the IC head, after Macau’s handover to China in 1999, local awareness of cultural preservation grew alongside improvements in quality of life and rapid economic growth.
The cultural heritage preservation efforts of Ung and his colleagues culminated in July 2005 in the inclusion of the historic city center on the UNESCO World Heritage list. The historic center covers an area of 1.32 square kilometers, which accounts for 13 percent of the Macau Peninsula.
“Macau is a densely populated city with nearly 600,000 residents and so many cultural heritage sites and museums. Therefore, we came up with the idea of turning Macau into an open-air museum as a whole,” Ung said.
The concept of an “open-air museum” was proposed by the IC in around 2010 and was well-received by local residents, he added. Together with the Tourist Office, the IC devised four walking tour routes – “A Tour of Historical Trails,” “A Tour of Nature and Creativity,” “A Tour of East Meets West” and “A Tour of Arts and Culture,” through which the essence of Macau’s historical sites could be showcased to visitors.
Traditional performances such as the lion dance, Cantonese opera performance and Chinese martial arts are staged on the walking tour routes, adding charm to this “cultural heritage capital.”
The Macau people have encountered unique problems in dealing with conflicts between preservation and development, Ung stated. Covering a total area of more than 30 square kilometers, the region has more than 20 museums, which, according to Ung, is extremely dense.
Till now, Macau’s museums have established a close connection with museums in the Chinese mainland and overseas. Since 1999, The Macao Museum of Art and China’s Palace Museum have continued to hold a joint exhibition every year. A great many of prestigious museums such as the Shanghai Museum and Nanjing Museum from the mainland, and the Louvre Museum and the Center Georges Pompidou of France have also held exhibitions in Macau.
The IC president said that nowadays he rarely hears objections from local citizens against cultural heritage preservation as was usual thirty years ago, instead now hearing their ideas and suggestions to promote the preservation programs. MDT/Xinhua