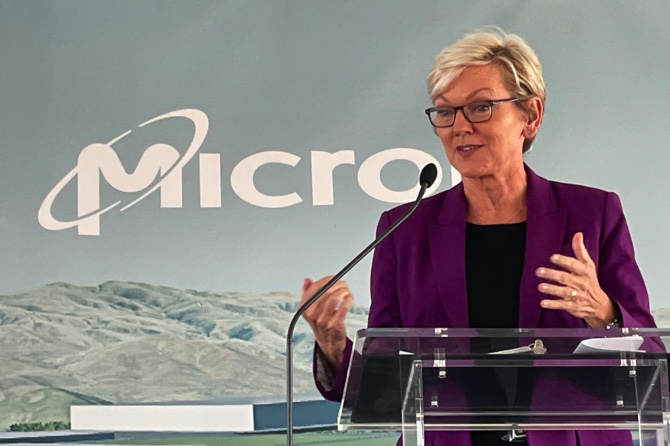 “It is time to get America making things again, with American parts and American labor,” Granholm told a crowd of about 250 guests and Micron workers invited to a tent-covered dirt field for a ceremonial groundbreaking. The event included setting off a ground-clearing explosion far from the crowd that emitted red, white and blue smoke.

The U.S. and Europe are pushing aggressively to build chipmaking capacity and reduce reliance on producers that are now mostly based in Asia. Semiconductor businesses have also been trying to diversify their operations to avoid bottlenecks caused by problems — such as a natural disaster or pandemic lockdown — in a specific region.

Micron officials said that the high desert, sagebrush steppe area east of Boise is expected to have the largest chipmaking cleanroom, or fab, in the U.S. by the end of the decade, covering 600,000 square feet and creating 17,000 jobs. Construction is expected to start in 2023, with some cleanroom working space ready by 2025 and expanding in phases.

Micron is among the nation’s largest chipmakers, with product development sites in five other states and eight countries. Research and development is centered in Boise.

Sanjay Mehrotra, Micron’s president and chief executive officer, said the company is committed to investing in the Idaho community — with an emphasis on STEM (science, technology, engineering, and math) education in both K-12 and higher education. He said the company would focus on reaching underrepresented and rural school populations.

Micron “will inspire young minds to build the STEM skills they need to succeed in our technology-based world,” he said.

In recent years, state Republican lawmakers have caused dismay among Idaho’s business community by launching attacks on public education spending, which succeeded in 2021 with a $2.5 million cut to universities despite a budget surplus.

But earlier this year, lawmakers approved a record $300 million boost to education. And earlier this month, lawmakers added another $410 million from a budget surplus in a legislative special session that was called due to high inflation.

“We really needed this (semiconductor plant) in the U.S. and not overseas,” said Republican state Sen. Scott Grow, who attended Monday’s groundbreaking ceremony and has helped push through legislation beneficial to Micron. “To get a big outfit like this, and to get enough workers, we have to do all we can here in Idaho to help provide that kind of education so this can continue to grow, and they don’t have to just bring in people from out of state.”

Several chipmakers last year signaled an interest in expanding their American operations if the U.S. government is able to make it easier to build chip plants. Samsung said in November it plans to build a $17 billion factory outside of Austin, Texas, and Intel broke ground last week on a $20 billon new computer chip facility in Ohio.

Micron’s $15 billion investment was made possible by last month’s passage of the CHIPS and Science Act, a $280 billion bill aimed at bolstering U.S. competitiveness against China and avoiding another chip shortage like the one that derailed the auto and tech industries during the pandemic. The law sets aside $52 billion to bolster the semiconductor industry that, due to COVID-related supply chain constraints, has struggled to manufacture the chips.

Besides the CHIPS law, Micron also benefits from property tax breaks in Idaho. And lawmakers earlier this year passed legislation, signed by Republican Gov. Brad Little, that eliminates sales taxes on expensive equipment Micron will have to buy to produce the chips.

Of the 17,000 expected jobs, 2,000 will be employed directly by Micron, and 15,000 are expected to come from other companies working in support of the new plant.

LaMarr Barnes, chief executive officer of Tokyo-based Kurita, said this company will bid to help create the supply of ultra-pure water needed for chipmaking. If successful, he expects to hire several hundred workers for the Boise area.

“We’d love to be able to do the work for this new fab, and if we do, we’d have to hire quite a bit of engineering staff,” he said. KEITH RIDLER, BOISE, MDT/AP