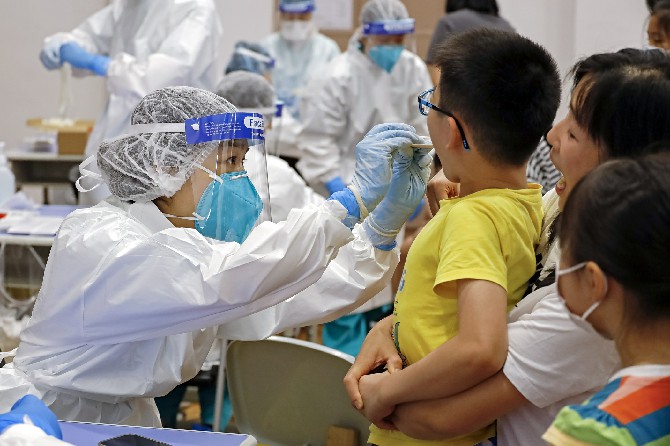 Neurosurgeon Tai Wa Hou, medical director of the public Conde de São Januário Hospital, admitted for the first time yesterday that import-related Covid-19 infections are actually local infections.
The categorization of infections was a debate topic at yesterday’s regular health press briefing, following the questions by the public on why the Health Bureau (SSM) did not identify the cases as local or community infections. In contrast, the SSM has identified them as import-related infections.
When reporting the latest Covid-19 figures in Macau, different from his approach in the past months, he mentioned for the first time that import-related infections are actually local infections.
Journalists later followed up with the opinion. Tai stated that there are only two types of infections: local and imported infections.
As its name suggests, imported infections or cases are those that are detected during a person’s quarantine period and before the person completes his quarantine period.
“When it’s not the case, it’s a local infection,” Tai said.
However, he explained that there are two scenarios within the spectrum of local infections. “In the first scenario, the source of infection is clearly found, which is an imported case,” Tai said. “These are identified as import-related cases.”
The second scenario involves infections that have an unknown source. “These cases will be identified as local cases, or cases with an unknown source of infection,” Tai added.

The definition of relapse cases
During this round of citywide SARS-CoV-2 polymerase chain reaction (PCR) test, several relapse cases have been found and quarantined, despite the SSM determining the risk of contagion being extremely small.
Tai was questioned by the Times on the medical definition of a relapse. For example, a patient with flu will not be considered as a relapse patient when they are tested positive for flu within the year.
In his response, Tai revisited the process of a hospitalized patient recovering and being discharged.
“Returning to the community implies the patient’s recovery,” Tai said. “However, in cases seen around the world, some patients were tested positive for the virus after a certain period of time after their recovery.”
He stressed that usually these positive results signal the detection of a part of the virus’s DNA pattern. “It is usually uncommunicable,” he added.
He said that there are other factors determining whether it is a relapse case, such as by testing the recovered patient’s antibodies.

Public reminded to update health code address
Public health doctor Leong Iek Hou, coordinator at the Center for Disease Control and Prevention (CDC), reiterated yesterday the importance of updating residential address when obtaining a health code.
As the city saw a series of new infections during the past two weeks or so, several red and yellow zones have been set up to cordon off interactions between communities with close contacts and the rest of the city.
“It came to our attention that a large number of residents had registered their old residential addresses,” Leong disclosed. When these individuals arrived at stations for the citywide PCR test, they were sent to the hospital or the Taipa Ferry Terminal’s Provisional Quarantine Area “due to unclear risks,” Leong said.
Although they later could provide proofs to verify that they were not connected with the Red or Yellow Zones, “it has put extra burden on our paramedic teams,” Leong explained.
Leong recommends members of the public to update their residential addresses on the health code platforms. Leong also reminds them to contact the Identification Services Bureau (DSI) to update their addresses if they have permitted the SSM to obtain their addresses from the DSI when necessary.

Therapists collecting PCR samples
The Times were told by readers that the SSM has assigned therapists, such as physiotherapists and psychotherapists, to handle sample collection at the citywide PCR test.
In the attempts to verify the information yesterday, the Times were assured by Tai that all registered medical personnel in Macau are eligible to assist in the test. “Of course, they need to undergo certain training,” Tai added.
“They have undergone technical and epidemiologic training,” Tai further explained. “First, they were trained with the know-how of nasopharyngeal and oropharyngeal swabs. Second, they were educated about the danger in the sample collection process and thus how to lower the risks.”
Tai added that the swabbing is not the most difficult; instead, it is more difficult to not get infected.
In contrast to the information obtained by the Times, Leong denied that the psychotherapists has participated in the sample collection process of this citywide PCR test.

The bus handrail in question…
On the question as to why only an individual (the 66th patient) has been infected on the bus trip so far, Leong stressed that the source of infection is allegedly not the bus.
On Tuesday, the public health doctor disclosed that the 66th and 74th patients took the same bus and held the same handrail. “We don’t dare say the point of infection is this [bus trip],” Leong admitted, adding that the health authorities are still in search of more evidence to rule in or out the point of infection.
She further explained that in some cases, not even members within a single family get infected by a diagnosed family member. “A person’s immunity and healthcare habits are among the factors to achieve or obstruct infections,” Leong said.

As the third round of citywide polymerase chain reaction (PCR) test sees its third day today, as of 4 p.m. yesterday, more than 670,000 samples have been collected, among which 540,000 yielded a negative result at 9 p.m. yesterday.
Neurosurgeon Tai Wa Hou, medical director of the public Conde de São Januário Hospital, announced the figures at the press conference yesterday.
The citywide test was set to end at 9 p.m. yesterday. Only six test stations will remain open as part of the citywide test. Those taking the tests can walk-in to the test stations and may experience a waiting time shorter than 15 minutes. However, prior reservation for the test is preferred.
The Novel Coronavirus Response and Coordination Center reminds members of the public to take the test prior to the time of closure. Failure to do so will result in their health codes being converted to yellow.
Results obtained from the citywide PCR test will not be shown on the health code, which means that they are not eligible for immigration purposes. Those who want a result for such purposes should approach a paid station for the test. AL