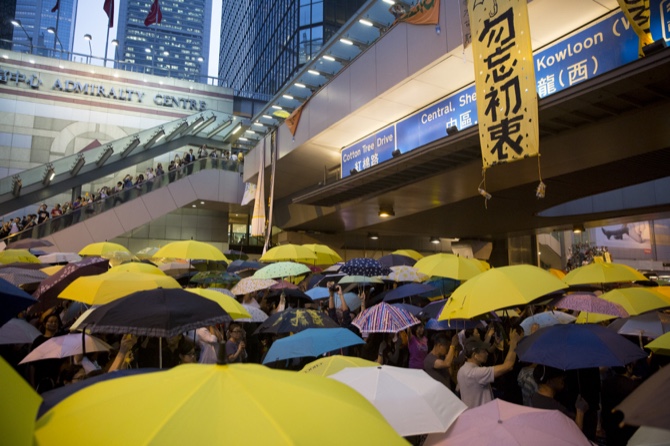 Macau students are overwhelmingly in favor of democratic reform in the special administrative region and are sympathetic toward Hong Kong’s 2014 Umbrella Movement, a new study has concluded, challenging the prevailing view of widespread political apathy in the MSAR.

The study, conducted by academic Ieong Meng U of the University of Macau, sampled 825 young people in the city and found that the majority supported the idea of universal suffrage and had a “preference for a minimal definition of democracy.” It also showed that most believed it was important to live in a democratic system and that they agreed with the view that student leaders in the neighboring territory’s Umbrella Movement were “fighting for democracy”.

Moreover, the study concluded that the stronger a student’s support for universal suffrage the more they were likely to “engage in unconventional political participation” as well as distrust both the Macau government and the central government in Beijing.

Building on his previous work exploring authoritarianism and the Chinese political landscape, Ieong’s latest study challenges the traditional view that Macau residents – especially the youth – are more concerned with economic and quality of life issues than political ones.

That view might have originated in two surveys on political attitudes conducted in the 1990s, which determined that Macau people did not think they were able to influence public policies and were unlikely to take action to oppose government wrongdoing. Ieong now suggests that these conclusions are outdated. The 2014 Anti-Retirement Package Bill Protest, by far the largest demonstration seen in the city since the 1999 handover, is evidence of the changing tide in public opinion, writes the academic.

However, even as youth in Macau experience a political awakening in the fashion of their Taiwan, Hong Kong and mainland China counterparts, demands for reform have grown not necessarily from the pursuit of democracy as an ideal, but by socio-economic grievances that continue to go unaddressed or unresolved by local authorities. Ieong thus attributes this political awakening to a lack of government responsiveness and accountability.

“In Macau, social grievances in recent years over pro-establishment camps and the Macau government are increasing due to their disregard of social demands for public housing, anti-corruption and government responsiveness and accountability,” he notes in the study.

Nevertheless, “bottom-up political-oriented social movements such as the one for Hong Kong […] was unrealistic given the weak civil society and comparatively strong social control in Macau” and the fact that such protests tend to be “issue-oriented” rather than “political-oriented.”

Using the Umbrella Movement as a point of reference, Ieong asked his survey respondents to rate how strongly they felt about the pursuit of universal suffrage using a 10-point scale that ranged from “total disagreement” (1) to “total agreement” (10). The respondents were then asked about how much they trusted the local government and the Chinese central government using a 4-point scale ranging from “none at all” (1) to “a great deal of trust” (4). A final questions was posed regarding the respondents’ frequency of participation in demonstrations and public consultations, again measured on a 4-point scale ranging from “never” (1) to “very often” (4).

According to Ieong, this suggests that Macau students overwhelmingly approve of the demand for universal suffrage, and that the longer they spent in the MSAR, the more strongly they felt this way.

Aggregate responses for the two other questions showed considerable distrust of government authorities and low rates of political participation from the public. A correlation was determined whereby those that were more in favor of universal suffrage were also more distrustful of local and central government authorities.

To reach his conclusions, Ieong specifies that his study has purposefully avoided the asking of abstract questions related to whether people sought democracy. Instead it measured preferences related to democracy by examining the thoughts of Macau people to a specific political incident – the Umbrella Movement.

In late 2014, tens of thousands of protesters brought Hong Kong’s central districts to a standstill for nearly 80 days. Adopting the symbol of the umbrella, the protests developed into a movement of the same name with the objective of pressuring the Hong Kong government into abandoning a candidate pre-screening process for the then-upcoming 2017 Hong Kong chief executive election.

The movement was ultimately unsuccessful and several of its leaders were arrested and thrown into prison. The response of the authorities prompted an outcry from the pan-democrat camp, which accused the government of turning the courts into a political tool.

However, the demonstrations in Hong Kong failed to inspire a copycat movement in Macau.

“Although apparently politically more stable compared with Hong Kong, Macau’s government suffered the same defects in the lack of legitimacy and increasing disconnection between the ruling parties and society,” remarks Ieong in the study. “The Umbrella Movement in Hong Kong provided a vivid example for Macau of what could occur if the demands of political participation overwhelmed the capacity that the existing political system could offer.”