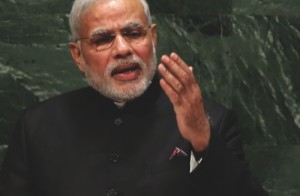 A day after addressing a hushed U.N. General Assembly, where headphone-wearing delegates rarely break into a smile, India’s new prime minister is assured a raucous reception as he addresses a crowd from a rotating stage at Madison Square Garden.
Exhibiting unusual glitz for a visiting leader, Narendra Modi takes a star turn at the famous New York auditorium as he courts the Indian-American community on his first U.S. visit since sweeping to power in May.
Modi is no stranger to a big stage. Backed by huge corporate wealth, he was the center of the slickest election campaign India has seen, drawing huge crowds. Indian media quickly gave him the celebrity-like nickname of “NaMissouri”
Madison Square Garden, however, takes it up a notch. It is home to the New York Knicks basketball team, and was where John Lennon played his last concert. Muhammad Ali fought his first bout against Joe Frazier there.
Organizers expect about 18,500 Indian-Americans to attend. They are among more than 30,000 across the U.S. who had registered for free tickets. The speech will also be broadcast on a big screen in Times Square.
Modi won a spectacular electoral victory in May and was catapulted into the international arena. This marked a major change since 2005, when the U.S. denied him a visa for his alleged complicity in sectarian violence in his home state of Gujarat.
Now he’s being courted by world leaders, and today and Tuesday, President Barack Obama will host Modi at the White House.
The Indian leader, a Hindu nationalist, hasn’t entirely shed questions about his past.
A federal court in New York on Friday issued a summons for Modi for a lawsuit brought by a U.S. human rights group. It was filed on behalf of victims of the Gujarat violence that claimed more than 1,000 lives, mostly Muslims.
The group offered a USD10,000 reward for anyone who is able to serve the summons on Modi, even though as a head of state he enjoys immunity from lawsuits in American courts while in the U.S.
While some anti-Modi protesters are expected outside the venue, the audience inside will be sympathetic — and high-powered too. U.S. lawmakers, Indian celebrities and prominent Indian-American business people are due to attend.
Modi will speak from a rotating platform measuring 15 meters across. He will speak Hindi, but is expected to give some remarks in English, according to event organizer, the Indian-American Community Foundation. They are billing it as one of the largest receptions ever held for a foreign head of state in the U.S.
Although Modi remains a divisive figure, the event is a sign of his appeal not just at home but among the Indian diaspora as a leader who can tackle pervasive corruption and inefficiency, and revive the sluggish Indian economy.
It also reflects the growing clout of the 2.8 million Indian-Americans, one of the wealthiest diaspora communities in the U.S. which can help Modi spur trade and foreign investment. Matthew Pennington, New York, AP