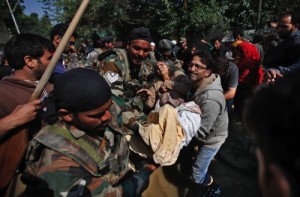 Indian Prime Minister Narendra Modi stepped up the military’s operation to save thousands from floods in Muslim-majority Jammu and Kashmir, where his Hindu nationalist party will contest elections this year.
More than 300,000 military personnel and 300 jets, choppers and boats have swarmed the northern state, rescuing more than 76,500 residents after a week of rain caused riverbanks to burst. This is the first major disaster faced by Modi’s administration, which in May won federal elections with the strongest mandate in 30 years. His Bharatiya Janata Party has never formed the government in Kashmir.
“The Modi government has been quicker and more efficient than past governments,” Ajai Sahni, executive director at the Institute for Conflict Management in New Delhi, said by phone. “To avoid further political challenges in a state already out of their control, Modi can’t afford to make any mistakes in handling this situation.”
A misstep risks escalating the world’s most militarized conflict, in a region that India and Pakistan have fought over for more than six decades. Modi is seeking to oust a regional party that has held the state for most of its 67-year history to fulfill a pledge of ensuring safe return of Hindus displaced by militancy. About 44,000 people have died in religious and border violence in Kashmir since 1988, where the army has been accused of extra-judicial killings and detentions.
More than 360 people have been killed during the floods, including 231 in Pakistan. Modi wrote to Pakistani Prime Minister Nawaz Sharif on Sept. 7, offering to help relief efforts in Pakistan controlled Kashmir.
Television images showed victims fighting over water bottles dropped by army helicopters after mudslides destroyed mountain roads. More than 354 sorties transported people from the Kashmiri valley and other flood-stricken regions to higher ground, said Major General Shokin Chauhan, additional director general for public information.
Modi has promised the state an additional 10 billion rupees (USD165 million) for relief and rehabilitation, and families of the dead will receive 200,000 rupees each, according to government statements. The military has transported 8,200 blankets, 150,000 liters of water and seven tons of baby food in the nine-day operation that’s India’s largest by assets deployed, topping flood relief in Uttarakhand in June 2013.
“The army will not move back to the barracks till the last man is brought to safety,” army chief Dalbir Singh said in an e-mailed statement Tuesday.
Kashmir’s Muslims have historically protested India’s military presence, and accused soldiers guarding the border against Pakistani insurgency of murder, kidnapping and rape. Modi’s BJP has declared plans to end the state’s special autonomous status, which allows Kashmir to set its own policies except in defense, foreign affairs and communications.
About 43 percent of Jammu and Kashmir’s adult population would vote for independence of the entire region, according to a 2010 Chatham House survey. Of the 3,774 people surveyed, 44 percent said they favored an independent state that also includes Pakistan controlled Kashmir.
In the past week, Kashmiris have seen a side of the military and Modi which they’ve rarely seen before, said Happymon Jacob, an assistant professor of international politics at Jawaharlal Nehru University in New Delhi.
“The silver lining in all this mess is the helping hand extended by Modi and the military who have done an exemplary job and really risen to the occasion,” Jacob said by phone. “The hope for Modi is that the dynamics shift, even if just a little bit. If he takes this opportunity to rebuild roads and houses, he could turn some heads in the state.” Kartikay Mehrotra, Bloomberg