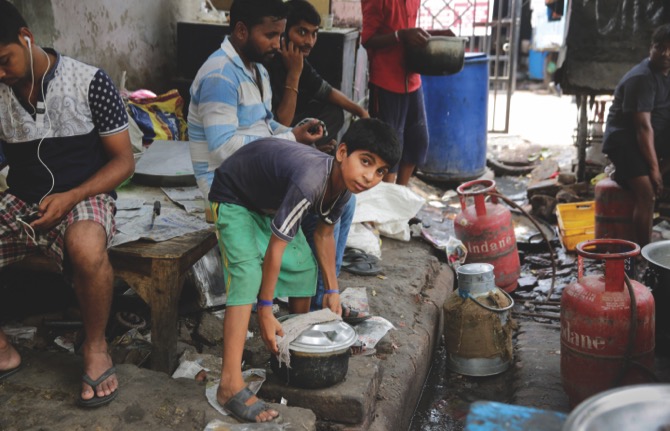 A child works outside at a local snack shop in Lucknow, India

Every day as Kamla dug through the mud and molded bricks for north Indian kiln, her two hungry children would cry out to her for food. The 200 rupees (USD3) she made for producing 1,000 bricks at a time wasn’t nearly enough to feed her family, and her daughter died of malnutrition before she turned 4.
Kamla’s story, told to one of the many charities fighting forced labor in India, is common enough to explain how slavery persists in the country despite rapid development that has helped make India the world’s fastest-growing economy.
This week, the South Asian democracy topped a global slavery index counting some 18.35 million modern slaves — or 40 percent of a global total of 45.8 million. The report, released by The Walk Free Foundation, included children and adults forced into labor, often unpaid or to pay off a debt, as well as child brides, child soldiers and migrant workers in 167 countries.
“These poor and deprived people are forced to leave their homes because of poverty. This is clear reflection of the failure of the welfare state,” said Lenin Rghuvanshi of the People’s Vigilance Committee on Human Rights, the charity which put together a December report based on testimony from 450 people rescued from slavery and bonded labor in India last year, including Kamla.
“Bonded labor is a contemporary type of slavery,” he said. “The government, which is supposed to provide them basic necessities, has failed them.”
Officials with the Indian Labor Ministry declined to comment on the slavery index report, which showed China a distant second with some 3.39 million modern slaves counted. China’s foreign ministry did not immediately respond to a faxed request for comment. North Korea was found to have the highest per capita rate of modern slavery, with 4.37 percent of its population affected.
The problem of slavery in India — including child marriage and bonded labor — has long been a challenge and cause for shame. Just last week, the chairman of the U.S. Senate Foreign Relations Committee lambasted India’s record on human rights, asking how India could have so many slaves. “I mean, seriously, do they have just zero prosecution abilities, zero law enforcement? I mean, how could this happen? It’s on that scale, it’s pretty incredible,” Sen. Bob Corker of Tennessee said.
Many had seen the 2014 Nobel Peace Prize for children’s rights activist Kailash Satyarthi, who was awarded along with Malala Yousafzai of Pakistan, as a sign that India would be forced to better protect its 1.25 billion citizens from abuse.
But child labor, the trafficking of sex workers, and bonded labor remains widespread, despite India’s rapid economic growth over the past decade. Laws meant to keep children in school and out of the workplace are routinely flouted, as millions are forced into difficult and sometimes toxic jobs including rolling cigarettes, blowing glass in factories, mining in stone quarries or dyeing leather in tanneries.
Some activists blamed the government for maintaining a top-down economy where illegal labor can still flourish because of high unemployment and abject poverty in the countryside. While the official jobless rate has hovered around 10 percent since 1983, some economists say that counting only the number of people actively looking for work ignores the masses who have only part-time jobs or who have simply given up.
“The laws are there, but there is no political will on the part of the government to implement them,” peace activist Swami Agnivesh said. “The government can’t afford to annoy rural rich as well as the urban rich who are exploiting the situation.”
Amid the rising criticism, the Indian government on Monday published draft legislation to curb human trafficking without punishing its victims. “At present the law says the trafficked and the trafficker are both criminals and they both go to jail. Now, we are saying the victim will not go to jail,” said Maneka Gandhi, the government’s minister for women and child development, according to Press Trust of India.
Still, some activists said the situation was improving in India, thanks to public awareness, legal reforms and police-backed raids on factories employing workers illegally.
“We get 20 complaints per day from family members and public in general” reporting labor abuse — a sign that awareness of the problem was growing, said Ramesh Senger from Satyarthi’s Save the Childhood Movement.
He noted that India’s carpet industry used to employ 300,000 trafficked children just a decade ago, but that the number has come down to an estimated 5,000-10,000. Meanwhile, the number of children forced to work making plastic bangles in parts of the northern state of Uttar Pradesh is now negligible, whereas thousands worked in the industry 10 years ago.
India’s garment industry hub in the Indian capital has also eliminated child labor, Sanger noted as an example of how police-backed raids can make a difference.
“We rescued nearly 400 children in the area between 2012-2014,” he said. “The garments industry in the area no longer employs child labor.”
But for those still mired in forced labor, the scourge can’t be ended soon enough. And with little recourse against abusive employers, they can only hope to be rescued by a charity intervening.
Radha, kidnapped from her family by a woman from her village and forced into bonded labor at a brick kiln near Varanasi, told the People’s Vigilance Committee on Human Rights she was raped daily by the factory’s owner when she was not cooking and cleaning for him, and then was beaten when she tried to object.
“I was so scared,” she said. “I’m still in pain from the rapes.” Biswajeet Banerjee & Ashok Sharma, Lucknow, AP