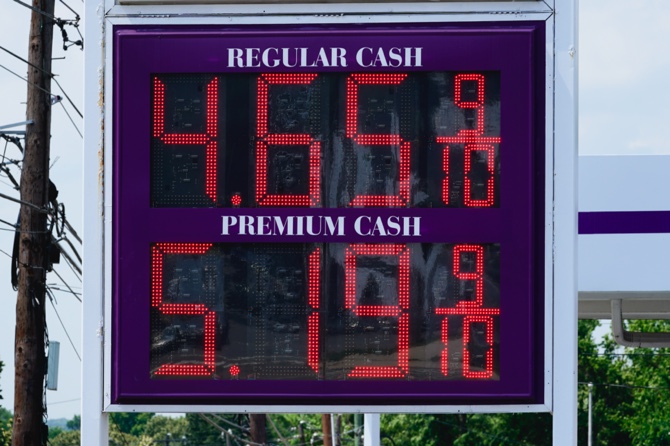 Surging prices for gas, food and rent catapulted U.S. inflation to a new four-decade peak in June, further pressuring households and likely sealing the case for another large interest rate hike by the Federal Reserve, with higher borrowing costs to follow.

Consumer prices soared 9.1% compared with a year earlier, the government said yesterday, the biggest yearly increase since 1981, and up from an 8.6% jump in May. From May to June, prices rose 1.3%, another substantial rise, after prices had jumped 1% from April to May.

The persistent price acceleration underscores the brutal impact inflation has inflicted on Americans, with the costs of necessities, in particular, rising much faster than average incomes. Lower-income and Black and Hispanic Americans have been hit especially hard, because a disproportionate share of their income goes toward such essentials as housing, transportation and food.

Excluding the volatile food and energy categories, so-called core prices rose 0.7% from May to June, the biggest such increase in a year. Compared with 12 months earlier, core prices jumped 5.9%, below a recent year-over-year high of 6.4% but still exceedingly high.

The U.S. inflation surge erupted from the swift rebound from the 2020 pandemic recession, spurred by vast federal aid, ultra-low Fed rates and pent-up spending fueled by savings built up during the nation’s shutdowns. As Americans channeled their purchases toward items for the home, like furniture, appliances and exercise equipment, supply chains became snarled and prices for goods soared.

In recent months, as consumer spending has gradually shifted away from goods and toward services like vacation travel, restaurants meals, movies, concerts and sporting events, the resulting higher demand has fueled high inflation in services, too.

Some economists have held out hope that inflation might be reaching or nearing a short-term peak. Gas prices, for example, have fallen from the eye-watering $5 a gallon reached in mid-June to an average of $4.63 nationwide yesterday — still far higher than a year ago but a drop that could help slow inflation for July and possibly August.

In addition, shipping costs and commodity prices have begun to fall. Pay increases have slowed. And surveys show that Americans’ expectations for inflation over the long run have eased — a trend that often points to more moderate price increases over time.

“There may be some relief in the July numbers — commodity prices have come off the boil, at least — but we are a very, very long way from inflation normalizing, and there is no tangible sign of downward momentum,” said Eric Winograd, an economist at asset manager AB.

The breadth of the price gains shows how rising costs have seeped into nearly every corner of the economy. Grocery prices have jumped 12.2% compared with a year ago, the steepest such climb since 1979. Rents have risen 5.8%, the most since 1986. New car prices have increased 11.4% from a year earlier. And airline fares, one of the few items to post a price decline in June, are nevertheless up 34% from a year earlier.

Energy prices soared 7.5% just from May to June, accounting for nearly half the month-over-month inflation. Gas prices have skyrocketed nearly 60% compared with a year ago.

From May to June, the cost of dental services surged 1.9%, the biggest one-month increase since record-keeping began in 1995.

The inflation spike has diminished consumers’ confidence in the economy, sent President Joe Biden’s approval ratings tumbling and posed a major political threat to Democrats in the November congressional elections. Forty percent of adults said in a June AP-NORC poll that they thought tackling inflation should be a top government priority this year, up from just 14% who said so in December.

Inflation is surging well beyond the United States, with 71 million people pushed into poverty in the three months after Russia invaded Ukraine, which further magnified energy and food prices, the U.N. Development Program said last week.

The war’s economic damage has been especially severe in Europe, with its reliance on Russian oil and natural gas squeezing businesses and consumers with sharply higher bills for utilities, groceries, gasoline and more. Inflation reached decades-high levels of 8.6% last month in the 19 countries that use the euro currency and 9.1% in the United Kingdom in May. CHRISTOPHER RUGABER, WASHINGTON, MDT/AP