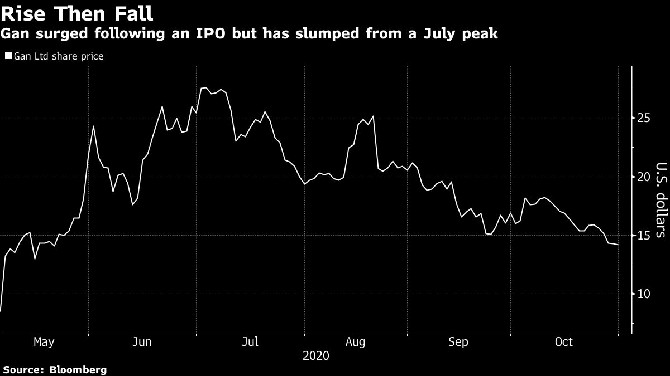 Insiders behind Gan Ltd. can sell their shares for the first time today, with enthusiasm for the future of sports gambling having already been dimmed by a new wave of virus cases.
The gaming software maker sold 6.38 million shares in its initial offering in May, valuing the company at $371 million. The London-based company upsized its offering and surged 56% to post one of the six best debut sessions of 2020 at the time. From there, Gan boomed to hit a record on July 2, having more than tripled from the IPO price.
The company, which calls itself the No. 1 online gaming platform in America, has benefited from a continued push for legal sports betting across the U.S. as traditional, brick-and-mortar casinos are challenged by a second wave of Covid-19. While shares have rallied 67% from the May IPO, the return is smaller than those for Penn National Gaming Inc., which has more than tripled over the same stretch.
Today’s lockup expiration could trigger a surge in trading volume as individual investors hold almost 30% of Gan shares. Chief Executive Officer Dermot Smurfit Jr. holds a 7% stake, the second biggest, while his uncle Michael Smurfit Jr., who’s also a member of the board, is Gan’s largest shareholder with a 9.4% stake, according to data compiled by Bloomberg.
Gan has been busy since transferring to the U.S. stock market from London. It signed a 10-year deal earlier this month with Wynn Resorts to serve as the enterprise software platform for its online sports betting and casino gaming business in Michigan, after agreeing in August to the same for Churchill Downs Inc.’s Internet sports betting and casino gaming business, BetAmerica.
Macquarie analyst Chad Beynon wrote in an Oct. 5 note that the Wynn deal was “an important catalyst for Gan’s revenue growth given Michigan’s population and sports base.” Gan’s shares have slipped 12% since the news as online gaming stocks like DraftKings Inc. underperformed the more traditional casinos like Wynn Resorts and MGM Resorts International.
Gan’s partnerships with some of the more traditional outlets that are looking to expand into online gaming have offset some pessimism surrounding its announcement that it no longer expected future revenue from FanDuel. But analysts defended the company anyway, with B Riley FBR saying Gan received just $3 million in revenue in 2019 from FanDuel’s sports gaming operations.
The lockup applies to the company, its executive officers, directors and certain affiliates, according to company filings MDT/Bloomberg