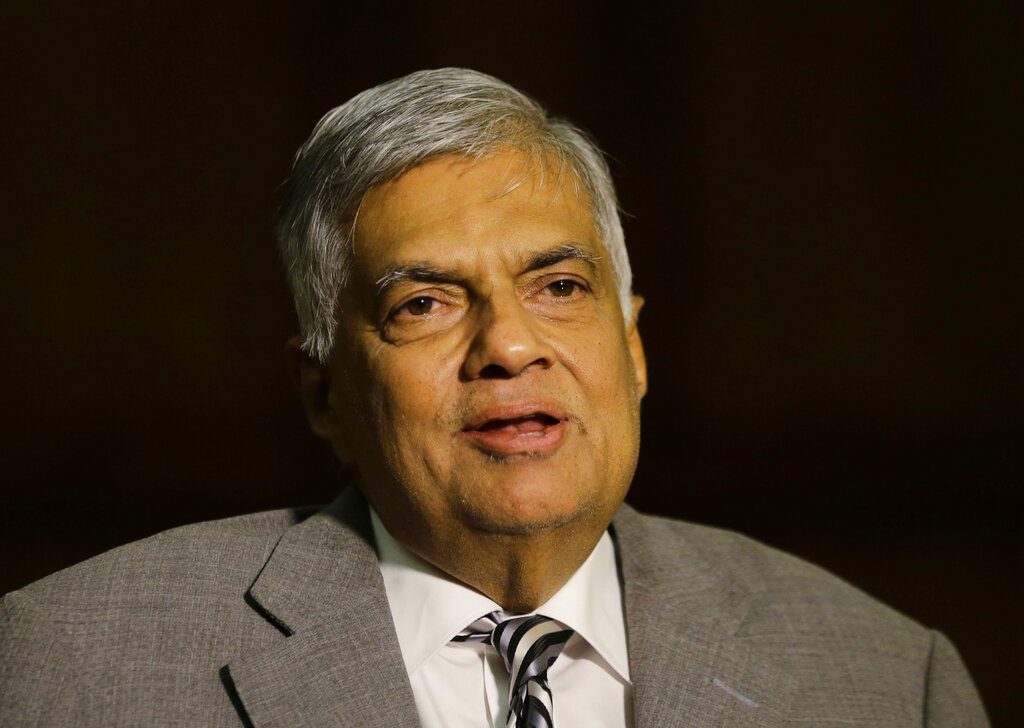 COLOMBO, Sri Lanka (AP) — Sri Lanka’s prime minister said today (Thursday) that suspects linked to the coordinated Easter Sunday bomb attacks remain at large and could have access to explosives.
Some of the suspects “may go out for a suicide attack,” Prime Minister Ranil Wickremesinghe said in an interview with The Associated Press.
Wickremesinghe spoke frankly about the greatest challenge the South Asian island nation has faced since its civil war ended a decade ago.
“This is another experience for us. Not that we are not strangers to terrorism, but this is global terrorism, so we have to ensure that we root this out,” he said.
More than 350 people were killed and another 500 people wounded in the string of suicide bombings at churches and luxury hotels in and around the capital, Colombo.
The attacks were claimed two days later by the Islamic State group, who posted a video of the man Sri Lankan officials say led the attack with seven others pledging their allegiance to the withered caliphate.
Police, meanwhile, issued a public appeal for information about three women and two men suspected of involvement in the attacks.
Wickremesinghe also said that the father of two of the suspected suicide bombers, Colombo spice dealer Mohammad Yusuf Ibrahim, had been arrested. He described him as a leading businessman active in politics known as “Ibrahim Hajiar,” a Sri Lankan term for Muslims who have gone on religious pilgrimages to Mecca.
The prime minister expressed doubt about Ibrahim’s complicity in the attack.
“People like that would not have wanted their sons to blow themselves up,” he said.
Sri Lankan authorities have blamed a local extremist group, National Towheed Jamaat, whose leader, alternately named Mohammed Zahran or Zahran Hashmi, became known to Muslim leaders three years ago for his incendiary online speeches.
On Wednesday, junior defense minister Ruwan Wijewardene said the attackers had broken away from National Towheed Jamaat and another group, which he identified only as “JMI.”
Wijewardene said many of the suicide bombers were highly educated and came from well-to-do families.
The prime minister said it appeared that Sri Lanka’s wealthiest and best-traveled Muslims were most susceptible to the doctrine professed by the Islamic State group.
“They were too educated and therefore, they were misled,” Wickremesinghe said.
The bombers were wealthy enough to have financed the entire operation themselves, though they would have needed outside help for training and bomb-building expertise, Wickremsinghe said.
He said that authorities still hadn’t confirmed whether Zahran, who was supposed to have led one of suicide missions, was among the corpses recovered from the scenes or still at large.
Sri Lanka has been sharply criticized for an apparent intelligence lapse. Government leaders have acknowledged that some intelligence units were aware of possible attacks weeks before the bombings, but the president and prime minister both have said the intelligence was not shared with them.
Wickremesinghe blamed the incident, in part, on a “breakdown of communication.”
President Maithripala Sirisena, who was out of the country during the Sunday attacks, had ousted Wickremesinghe in October and dissolved the Cabinet. The Supreme Court later reversed his actions, but relations between the two top leaders have remained frigid.
In the immediate aftermath of Sunday’s attacks, Sri Lanka blocked most social media, with the prime minister expressing concern that it could be used to incite violence in the country of 21 million.
Wickremesinghe said Thursday that security forces were trying to help Muslim Ahmadis from Pakistan seeking refugee status in Sri Lanka, who told AP they had been attacked and beaten in the days following the bombings.
Some people “had become suspicious of foreigners, not of Muslims per se,” Wickremesinghe, said.