Intimidation of HK judges must be punished severely: China spokesperson for SARs 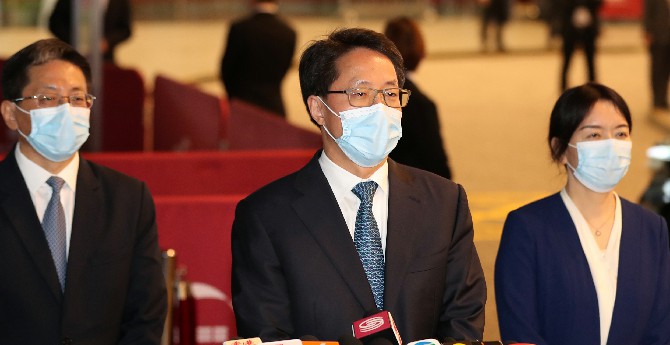 Zhang Xiaoming, deputy director of the Hong Kong and Macau Affairs Office of the State Council

A spokesperson for the Hong Kong and Macau Affairs Office of the State Council on Sunday denounced the recent intimidation against a judge in the Hong Kong Special Administrative Region (HKSAR), saying the lawless acts must be punished severely.
After handing down sentences on Jimmy Lai and nine other defendants who were convicted of organizing and inciting others to participate in an illegal assembly, the office of the judge in charge received phone calls that threatened to harm her and her family.
Such intolerable acts have posed a serious threat to the personal security of judges, blatantly flouted the HKSAR’s judicial system, and violated the SAR’s criminal code, as well as the Law of the People’s Republic of China on Safeguarding National Security in the HKSAR, the spokesperson said.
The spokesperson stressed the importance of verdicts delivered by many HKSAR judges in relation to illegal acts that took place during the disturbance over proposed legislative amendments in Hong Kong, saying they have significantly safeguarded the authority of the law and boosted the confidence of Hong Kong residents and the international community in the rule of law in the SAR.
However, a few anti-China individuals seeking to destabilize Hong Kong have perpetrated a number of assaults, smears and acts of intimidation against these judges, and have attempted to impede the impartial delivery of justice, a matter that should be resolutely tackled, the spokesperson said.
The spokesperson emphasized that the rule of law is the cornerstone of Hong Kong’s long-term prosperity and stability, which is safeguarded by the judges.
The central government firmly supports the HKSAR’s judges in impartially administering justice in accordance with the Constitution, the Basic Law and the national security law in the HKSAR, and supports efforts by the HKSAR to bring to justice those criminals whose acts infringe upon the safety and dignity of judges, the spokesperson added. MDT/Xinhua