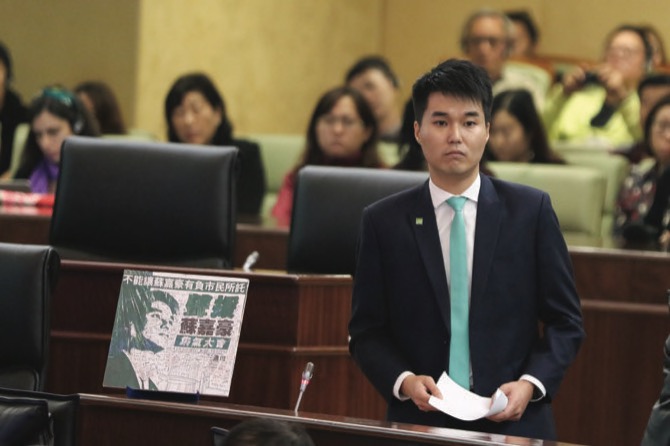 International media are homing in on Monday’s suspension of legislator Sulu Sou, comparing it to the recent crackdown on democrat lawmakers and activists in neighboring Hong Kong.

On Monday afternoon, lawmakers in Macau’s Legislative Assembly (AL) voted 28-4 in favor of suspending the young democrat so that his prosecutorial immunity could be waived and he could be investigated and possibly brought to court.

Sou stands accused of the crime of aggravated disobedience dating back to a demonstration last year that raised concerns over irregularities regarding a RMB100 million donation from the Macao Foundation to the mainland’s Jinan University. During the demonstration, Sou allegedly violated police orders by walking on the road (instead of the sidewalk) and vandalized the grounds of the government’s headquarters.

Democrats in the city – including the association to which Sou belongs, New Macau Association – have criticized his suspension as being political in nature, rather than judicial.

This is a point expounded on in international and greater China- based media outlets, which have compared the case to the democrat crackdown in Hong Kong.

Reuters reported that many people in Macau believe that the decision mirrors cases in Hong Kong, where young democrat lawmakers were suspended last year following an oath-taking controversy. More recently, high-profile democracy activists including Joshua Wong and lawmaker Nathan Law were jailed for their involvement in organizing the Occupy movement that crippled Hong Kong in 2014.

Citing Macau lawmaker Pereira Coutinho – who steadfastly defended Sou on Monday – as well as local lawyer Jorge Menezes, Reuters reported that the case might signal a deterioration in Macau’s rule of law.

“This may be the beginning of the death sentence to Macau’s rule of law, and it will end up having an impact in the casino industry,” said Menezes, as cited by the media outlet. “Sou was stripped of his rights to participate in the debate and vote in a clear violation of the assembly’s rules.”

Menezes told Reuters that he had concerns that further violations to the rule of law could impact the casino industry, possibly during the upcoming license renewal negotiations between 2020 and 2022.

Taiwan’s Straits Times also highlighted similarities in the situations between Hong Kong and Macau, recalling Sou’s involvement in one of the MSAR’s largest anti-government protests in 2014, when 20,000 people protested a generous retirement and compensation package for outgoing government officials.

It is not without a sense of irony that the 2014 ‘compensation bill’ had also proposed to bestow the chief executive with prosecutorial immunity for any crimes committed during his tenure.

While noting that the pro-democracy movement in Macau is considerably smaller than in nearby Hong Kong, the Straits Times acknowledged that there have been “outbursts of frustration against the government,” including earlier this year over the government’s handling of the devastating Typhoon Hato.

Several media outlets described Sou’s victory in the 2017 Legislative Assembly election as “a slap in the face to local officials over Typhoon Hato.”

Meanwhile, the Hong Kong Free Press raised concerns about the legality of the decision and whether its punishment is proportionate to the alleged offense.

“During the meeting on Monday, he was not allowed to make a speech or vote. He was only allowed to give responses to lawmakers’ questions,” it noted, stressing that the case did not involve corruption, breach of duty, organized crime or any harm to the public interest.

China’s official press agency, Xinhua, had little to say on the matter other than that Sou’s suspension makes him the first lawmaker to have his mandate revoked since the founding of the MSAR.