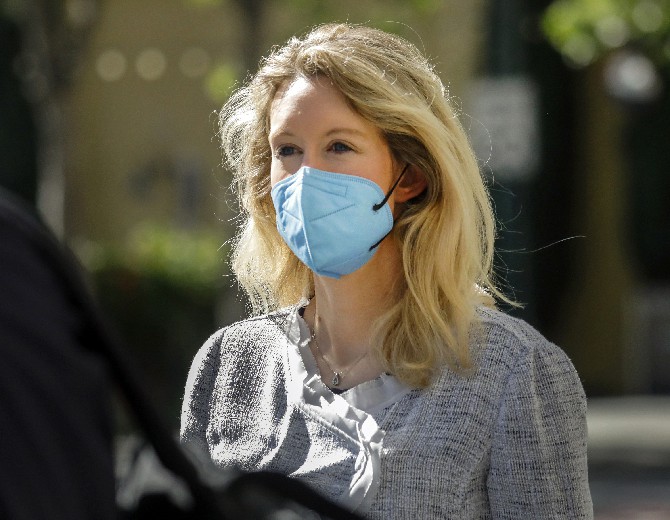 One-time entrepreneur Elizabeth Holmes, under questioning by prosecutors, struggled yesterday [Macau time] to recall key events that led to her facing criminal fraud charges for allegedly fleecing investors and customers of her failed blood-testing startup Theranos.
Her cross-examination began the day after she shared painfully vivid memories of alleged abuse by her ex-lover and business partner, Sunny Balwani.
In between bouts of hazy recollection, Holmes wept on the witness stand after the federal prosecutor interrogating her asked to read aloud some of the amorous texts that she and Balwani exchanged during a five-year period while they were running Theranos and living together in a stealth romantic relationship.
“U are God’s tigress and warrior. You are extraordinary,” Balwani cooed to Holmes in a 2015 documents displayed in court. Holmes quickly responded with this text: “Coming from my tiger means the whole universe to me.”
While poring over the old texts, Holmes occasionally dabbed away tears and wiped her nose with a tissue. The jury watched and listened along with a packed courtroom that included one person who trained a pair of binoculars on Holmes from a back row.
The drama unfolded the day after Holmes cast herself as a victim of Balwani’s abusive and controlling behavior while they were romantically involved from 2005 to 2016. Balwani, 56, also served as Theranos’ chief operating officer from 2009 to 2016 while Holmes, 37, was the CEO and controlling shareholder.
As part of her testimony, Holmes said she was raped at Stanford — a traumatic experience that she asserted Balwani exploited to control everything from her diet to her friendships.
Both Holmes and Balwani are now fighting criminal charges of duping investors and patients into believing that Theranos has invented a device that could scan for hundreds of potential health problems with a few drops of blood. After raising nearly $1 billion, Theranos collapsed amid revelations that the purportedly revolutionary technology she was peddling was horribly flawed.
Holmes’ trial, which began in early September, is now heading toward its climax. Holmes will return to the stand on Dec. 7. Her testimony could wrap up that day, raising the possibility that jury deliberations could begin by the end of next week.
Balwani, who is being tried separately, is expected to face the court early next year. His attorney, Jeffrey Coopersmith, has denied Holmes’ allegations of “intimate partner abuse.” Coopersmith yesterday also told U.S. District Judge Edward Davila that Balwani would assert his Fifth Amendment right against self-incrimination if he were called to testify in Holmes’ trial.
Although Holmes has been on the stand since Nov. 19, Tuesday marked the first opportunity for federal prosecutors to grill her under oath.
Robert Leach, the government lawyer confronting Holmes, didn’t touch upon Holmes’ alleged rape nor her testimony about Balwani berating her, sometimes in profane terms. Instead, he used roughly 12,000 texts sent between Holmes and Balwani to counter her contention that they had a relationship that was more toxic than romantic.
At one point, Leach asked Holmes if she would be surprised if the word “love” appeared 594 times in the texts obtained by the government and the word “loving” was used 105 times. “No,” Holmes said with a slight smile.
But Holmes spent much of the time responding “I don’t remember” and “I don’t know” to Leach’s questions about key incidents in the startup’s history. She claimed forgetfulness so frequently that Leach made the phrase “let’s see if I can refresh your memory” a common refrain as he presented her with document after document related to the fraud charges.
Leach seemed intent on proving that Holmes knew she was making false statements to investors and Walgreens, which briefly used Theranos’ blood tests in its pharmacies.
Holmes’ apparent forgetfulness contrasted sharply with her clear recall of her interactions with Balwani — some of them dating back more than a decade.
But she also seemed to have reflected on her behavior at Theranos. She expressed remorse for the way she responded to the concerns of two former employees and her attempts to stop the 2015 publication of a Wall Street Journal expose that helped lead to Theranos’ collapse.
“I could not say more strongly the way that we handled the Wall Street Journal process was a total disaster. We really messed up,” Holmes said.
John Carreyrou, the reporter who wrote the Wall Street Journal story and a book about Theranos’ rise and fall, sat in the back of the courtroom during Holmes’ moment of contrition while taking notes for a podcast he has been doing about the trial.
Holmes also acknowledged she was too quick to dismiss warnings from the two former employees, Erika Cheung and Tyler Shultz, who reported that Theranos’ blood-testing device — dubbed Edison — was delivering inaccurate results that could endanger patients’ health.
“I sure as hell wished we treated her differently and listened to her,” said Holmes of Cheung, who quit Theranos in exasperation after concluding her complaints were being ignored.
Shultz, the grandson of former U.S. Secretary of State and Theranos board member George Shultz, who died earlier this year, also resigned from Theranos in 2015 under similar circumstances.
Holmes could face prison time of up to 20 years if convicted. MICHAEL LIEDTKE, SAN JOSE, MDT/AP