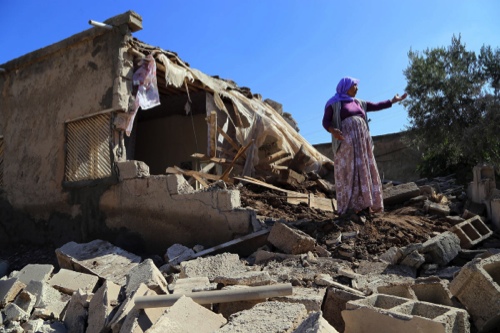 A woman stands in front of her house which is destroyed by a mortar shell, in Alanyurt neighborhood of Sanliurfa’s Suruc district, Turkey

Turkey sent busloads of troops to its border with Syria and considered military options as an Islamic State onslaught against Syrian Kurds drew Turkey deeper into its neighbor’s fighting.
Military chief General Necdet Ozel, flanked by top commanders, briefed the cabinet yesterday, according to footage on the CNN-Turk television channel. Steps to protect the border and create a secure zone within Syria for refugees fleeing the violence were on the table, A Haber television said, without citing anyone. The government is drafting legislation that would extend its mandate to deploy troops abroad for military operations, Hurriyet newspaper reported, without saying where it got the information.
Tens of thousands of Syrian Kurds have fled across the border into Turkey since the Islamic State opened an assault on the mostly Kurdish Syrian border town of Kobani, also known as Ayn al-Arab. A large explosion shook Kobani yesterday, and Turkish ambulances began ferrying injured people from the Mursitpinar border crossing to a state hospital nearby, TRT reported.
The Syrian Kurds are the latest group to be targeted by Sunni Islamic State militants, who have also driven Iraqi Christians and Yezidi communities from their homes in their campaign to establish a Muslim caliphate in Syria and Iraq.
Turkish leaders have expressed alarm at the growing number of refugees and called for a “safe zone” inside Syria where they can be given shelter. As it considers its options, NATO-member Turkey is also keen to prevent Kurdish rebels who fought the government in Ankara for three decades “from gaining ground when jihadis retreat southwards,” Mehmet Muderrisoglu, an analyst at Eurasia Group, said in e-mailed comments Monday.
Still, Turkey is “very unlikely to move beyond the border and maintain a military presence on Syrian soil” on its own because it would “seem like an invader,” Muderrisoglu said. The U.S. and its coalition partners have “no intention of manning a buffer zone.”
On Monday, errant shells fired by Islamic State militants landed inside Turkey, injuring five people, Turkish Kurdish officials said. The Turkish military immediately reinforced the border with tanks, and CNN-Turk television said hundreds more soldiers were dispatched to reinforce the frontier.
A report in the Yeni Safak newspaper that the Islamic State had dispatched more forces to a tiny Turkish enclave in Syria where 36 Turkish soldiers guard an Ottoman memorial heightened tensions. Turkey has vowed to defend the shrine to Suleyman Shah, a relation of the founder of the Ottoman Empire, which lies in the area where Islamic State is battling Syrian Kurds and has been Turkish territory since a 1921 treaty.
Nihat Ali Ozcan, an analyst at the Economic Policy Research Foundation in Ankara, said that wasn’t an empty threat.
“Any attack on Turkish soldiers at Suleyman Shah would trigger a military operation by Turkey,” Ozcan said by phone. “Turkey would not abandon that memorial site and its territory there because it has symbolic and historical importance for the Turkish people.”
In Iraq, Kurdish forces and police units retook three villages south of Kirkuk from the Islamic State, Al-Mada Press reported yesterday. The Islamic State also controls large parts of Iraq’s western Anbar province, with top officials saying Monday that more than half of the provincial capital was under the guerrillas’ command.
Turkey has signaled it’s ready to join the coalition assembled by the U.S. to fight the Islamic State, reversing an earlier reluctance to get involved in the conflict. Turkey “can’t stay out” of the campaign, Turkish President Recep Tayyip Erdogan said Sept. 28.
Erdogan said that the U.S.-led campaign must focus on removing Assad by strengthening rebel groups, as well as defeating the Islamic State. Onur Ant and Selcan Hacaoglu, Bloomberg