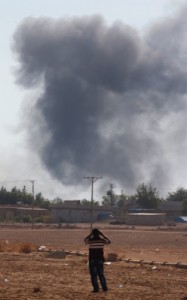 Smoke rises after an airstrike in Kobani, Syria as fighting intensified between Syrian Kurds and the militants of Islamic State group

The U.S. military dropped weapons, ammunition and medical supplies to the besieged Syrian town of Kobani, as Turkey said it would allow Kurdish fighters from neighboring Iraq to come to the town’s aid.
The air drop was the first such mission by the U.S. Air Force to the town’s Kurdish defenders, who have held off an Islamic State offensive for almost a month.
Turkey would allow Kurdish Peshmerga forces “to cross into Kobani to support” the city’s defense, its Foreign Minister Mevlut Cavusoglu said yesterday. “We are in cooperation with the coalition” to prevent Kobani’s fall, Cavusoglu said at a news conference.
Turkey’s decision to allow Kurdish reinforcements to reach Kobani will boost the U.S. and its coalition partners as they seek to undermine support for Islamic State. A successful defense of Kobani would prevent the group from further extending its grip over a stretch of the border between Syria and Turkey.
Cavusoglu’s comments reflect a change in tone following the U.S. air supply of Kobani. On Oct. 18, Turkish President Recep Tayyip Erdogan said that it would be “impossible” to support supplying weapons to the town’s defenders, who are largely members of a group called YPG. The group is an affiliate of the Turkish group called the Kurdistan Workers Party, or PKK, which is classified as a terrorist organization by the U.S., Turkey and the European Union.
President Barack Obama informed Erdogan about the plan during a telephone call on Oct. 18, according to an administration official who briefed reporters on condition of anonymity.
Central Command said Sunday that while the militants’ advance had been slowed, the “security situation in Kobani remains fragile.” It said its planes have conducted more than 135 airstrikes against Islamic State forces in Kobani. Joe Sobczyk and Toluse Olorunnipa, Bloomberg