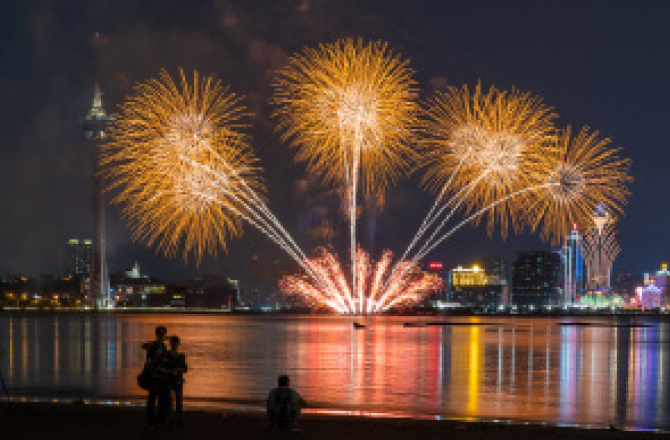 This year was the 30th Macao International Fireworks Display Contest, themed “Duo Celebrations for Macao.” The contest came to a close last Saturday.

This year was more competitive, as two extra teams were added to the lineup, compared to the 10 teams in previous years.

An extra night was also added to the program, with the contest expanded to six non-consecutive nights from five previously. The Macao Government Tourism Office arranged for the contest to cover Chinese National Day on October 1.

The other teams participating this year were Malaysia, the Philippines, Portugal, South Korea, the United Kingdom, Romania, South Africa, Canada and Australia.

The awards ceremony was held on the last night of the contest, immediately following the show by the Australian team.

Vantage points on the Macau Peninsula and Taipa bustled with spectators. Besides the Fireworks Contest, the 4th Macau International Lantern Festival was held along the Waterfront Promenade of One Central Macau and Wynn Macau, as well as at Anim’Arte Nam Van, all of which were popular places for watching the fireworks this year.

Other outreach programs included a photo contest, a student drawing contest, a poster design contest and a video production contest. The office also said it supported community organizations in organizing a weekend workshop program and “immersed local participants in a palette of artistic experiences” through a variety of activities. AL