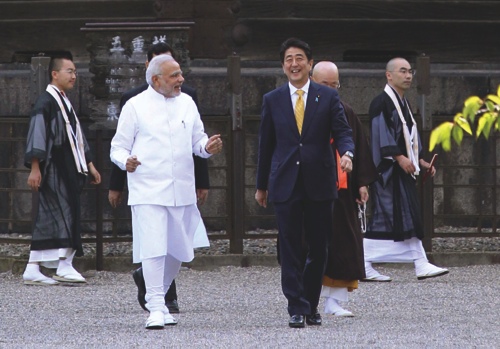 Indian Prime Minister Narendra Modi courted Japan’s government and business leaders yesterday, winning pledges of help for his effort to revitalize the lagging Indian economy.
Modi is visiting Japan with a delegation of more than a dozen Indian tycoons, hoping to take the still relatively low-key business relations between the countries to a “new level.”
He and his Japanese counterpart Shinzo Abe also aim to strengthen security ties, with an eye toward an increasingly assertive China.
In a speech to Japanese business leaders yesterday, Modi promised to set up a team to facilitate trade and investment.
“When I became prime minister, there were high expectations. Not just high expectations, but people expected speed in decisions,” Modi told leaders of Japan’s five big business groups. “I give you the assurance that what we have done in the past 100 days, the results will be seen very quickly.”
Modi became prime minister in May with pledges to transform India’s troubled economy and is keen to win more support for ambitious energy and construction projects, including high-speed railways.
Japanese officials were set to promise a doubling in Japan’s foreign investment over the next five years, from USD2 billion last year, the Japanese newspaper Nihon Keizai Shimbun reported.
Prospects for a deal on nuclear energy cooperation during Modi’s five-day visit remained uncertain despite last-minute efforts to reach an agreement on safeguards sought by Japan.
During Abe’s first term in office, in 2006-2007, the two countries signed an agreement on cooperating in building an industrial corridor between Mumbai and New Delhi, two of India’s biggest cities. At that time, Modi was chief minister of the fast-growing, business-friendly state of Gujarat.
Abe took the rare step of traveling to the ancient city of Kyoto over the weekend to host and dine with Modi. The two leaders, who have exchanged affectionate greetings via their Twitter feeds, were shown in a bear hug.
In a gesture toward his golf-loving Japanese hosts — Abe golfs frequently — Modi boasted of having beefed up the links in Gujarat during his years as chief minister.
“I felt that as a government, to facilitate Japanese visitors to the state, among other things we developed golf courses,” he said, drawing enthusiastic applause.
Since taking office, Modi has traveled to neighboring Nepal and Bhutan and attended a summit of the BRICS emerging nations — Brazil, Russia, India and China. He helped launch an effort to open bank accounts for the poor in India and has set up an investigative team to look into corruption. Meanwhile, the economy has picked up pace in what some analysts are calling the “Modi bounce.” AP