Two very different visions of the hell that is war are seared into the minds of World War II survivors on opposite sides of the Pacific.
Michiko Kodama saw a flash in the sky from her elementary school classroom on Aug. 6, 1945, before the ceiling fell and shards of glass from blown-out windows slashed her. Now 78, she has never forgotten the living hell she saw from the back of her father, who dug her out after a U.S. military plane dropped an atomic bomb on the city of Hiroshima, Japan.
People were walking like zombies, with their flesh scraped and severely burned, asking for help, for water. A little girl looked up, straight into Michiko’s eyes, and collapsed.
Lester Tenney saw Japanese soldiers killing fellow American captives on the infamous Bataan Death March in the Philippines in 1942. “If you didn’t walk fast enough, you were killed. If you didn’t say the right words you were killed, and if you were killed, you were either shot to death, bayonetted, or decapitated,” the 95-year-old veteran said. He still has the bamboo stick Japanese soldiers used to beat him across the face.
Different experiences, different memories are handed down, spread by the media and taught in school. Collectively, they shape the differing reactions in the United States and Japan to Barack Obama’s decision to become the first sitting American president to visit the memorial to atomic bomb victims in Hiroshima later this week.
The U.S. dropped a second atomic bomb on Nagasaki three days after Hiroshima, and Japan surrendered six days later, bringing to an end a bloody conflict that the U.S. was drawn into after Japan’s surprise attack on Pearl Harbor in December 1941.
Japan identifies mostly as “a victim rather than a victimizer,” Stephen Nagy, an international relations professor at the International Christian University in Tokyo, said. “I think that represents Japan’s regional role and its regional identity, whereas the United States has a global identity, a global agenda and global presence. So when it views the bombing of Hiroshima, Nagasaki, it’s in the terms of a global narrative, a global conflict the United States was fighting for freedom or to liberate countries from fascism or imperialism. To make these ends meet is very difficult.”
A poll last year by the Pew Research Center found that 56 percent of Americans believe the use of nuclear weapons was justified, while 34 percent do not. In Japan, 79 percent said the bombs were unjustified, and only 14 percent said they were.
Terumi Tanaka, an 84-year-
old survivor of the Nagasaki bombing, said of Obama: “I hope he will give an apology to the atomic bomb survivors, not necessarily to the general public. There are many who are still suffering. I would like him to meet them and tell them that he is sorry about the past action, and that he will do the best for them.”
The White House has clearly ruled out an apology, which would inflame many U.S. veterans and others, and said that Obama would not revisit the decision to drop the bombs. 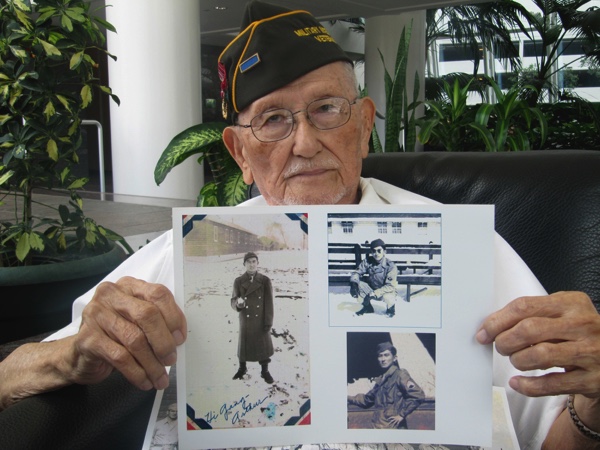 Arthur Ishimoto, 93, a Japanese-American and U.S. Army Military Intelligence Service veteran, poses with archival photographs of himself as he is interviewed in Honolulu

“A lot of these people are telling us we shouldn’t have dropped the bomb — hey, what they talking about?” said Arthur Ishimoto, a veteran of the Military Intelligence Service, a U.S. Army unit made up of mostly Japanese-Americans who interrogated prisoners, translated intercepted messages and went behind enemy lines to gather intelligence.
Now 93, he said it’s good for Obama to visit Hiroshima to “bury the hatchet,” but there’s nothing to apologize for. Ishimoto, who was born in Honolulu and rose to be an Air Force major general and commander of the Hawaii National Guard, believes he would have been killed in an invasion of Japan if Japan had not surrendered.
“It would have been terrible,” he said. “There is going to be controversy about apologizing. I don’t think there should be any apology. […] We helped that country. We helped them out of the pits all the way back to one of the most economically advanced. There’s no apology required.”
Beyond the deaths — the atomic bombs killed 140,000 people in Hiroshima and 73,000 in Nagasaki by the end of 1945 — the effects of radiation have lingered with survivors, both physically and mentally.
Kodama, the Hiroshima schoolgirl, faced discrimination in employment and marriage. After her first love failed because her boyfriend’s family said they didn’t want “radiated people’s blood in their family,” she married into a more understanding one.
The younger of her two daughters died of cancer in 2011. Some say she shouldn’t have given birth, even though multi-generational radiation effects have not been proven.
Obama doesn’t have to apologize, Kodama said, but he should take concrete actions to keep his promise to seek a nuclear-free world.
“For me, the war is not over until the day I see a world without nuclear weapons.” she said. “Mr. Obama’s Hiroshima visit is only a step in the process.”
Nagasaki survivor Tanaka views the atomic bombings as a crime against humanity. A promise by Obama to survivors to do all he can for nuclear disarmament “would mean an apology to us,” he said.
He added that his own government also should take some of the blame for the suffering of atomic bomb victims. “It was the Japanese government that started the war to begin with, and delayed the surrender,” he said, adding that Japan has not fully faced up to its role in the war.
Japan did issue apologies in various forms in the 1980s and 1990s, but some conservative politicians in recent years have raised questions about them, said Sven Saaler, a historian at Sophia University in Tokyo.
“In particular right now when Japan has a government that is […] backpedaling in terms of apologizing for the war, if now the U.S. apologized, that also would be, I think, a weird signal in this current situation,” Saaler said.
Tenney, one of only three remaining POWs from the Bataan Death March, wants Obama in Hiroshima to remember all those who suffered in the war, not just the atomic bomb victims.
“From my point of view, the fact that the war ended when it did and the way it did, it saved my life and it saved the life of those Americans and other allied POWs that were in Japan at the time,” he said at his home in in Carlsbad, California. “I was in Japan, shoveling coal in a coal mine. No one ever apologized for that. […] I end up with black lung disease because they didn’t take care of me in the coal mine, and yet there is no apology, no words of wisdom, no nothing.”
Obama’s visit is firmly supported by Earl Wineck, who scanned the skies over Alaska for Japanese warplanes during World War II.
“He’s not going there like some of them might, and keep reminding them of all their transgressions,” the 88-year-old veteran of the Alaska Territorial Guard said. “That should have ended after the war, and I think a lot of it did, but of course, there’s always people who feel resentment.”
Japan occupied two Alaskan islands during the war. The battle to retake one of them, Attu Island, cost about 3,000 lives on both sides.
“We hated them,” Wineck said “But things change, people change, and I think people in the world should be closer together.”
How so?
One Tokyo high school student has a suggestion. Mayu Uchida, who said she cried when she heard survivors recount their memories on a school trip to Hiroshima, wants Obama to bring home what he learns and tell any supporters of nuclear weapons how horrifying they are.
“He could also suggest, promoting opportunities for more Americans to visit Hiroshima, or to hear the story of Hiroshima,” the 18-year-old said. “It will be even better if those opportunities are available for younger generations like us.” Mari Yamaguchi & Julie Watson, Tokyo, AP