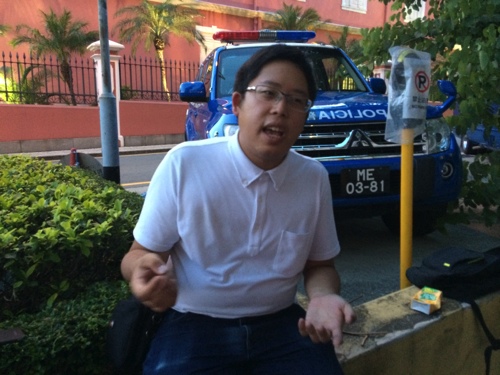 chinese media ‘cool down’ the referendum

The civil referendum and the subsequent suppression have been widely reported in Macau’s English and Portuguese newspapers. Nevertheless, the same cannot be said about the treatment of the news in the Chinese media.
Macau Daily put the story in the A6 page and focused on the alleged aggravated disobedience allegation, as well as the explanation from the Office for Personal Data Protection (GPDP). The newspaper even found a scholar from the University of Macau to comment on the case, who claims that the police’s action is “appropriate.” Hou Kong Daily also takes a similar stance and cites an opinion from the Macau Chamber of Commerce that supports the actions taken by the police. Meanwhile, the position of Jornal Cheng Pou is similar to those of the non-Chinese media. Its report highlights the police’s crackdown on the mobile voting booths. It also includes a response from Sulu Sou, who suggests that GPDP’s action is an insult to the public will.

The Public Security Police has admitted that it has gathered information from residents who participated in the civil referendum. Online media cited a resident who claimed that after they participated in the civil referendum, a PSP officer asked them to provide their name, ID number, date of birth and phone number. PSP told TDM that, as the civil referendum organizers are alleged to have committed aggravated disobedience, they only collected the residents’ information so that the authorities could ask them to be witnesses and to assist with their investigation. JPL