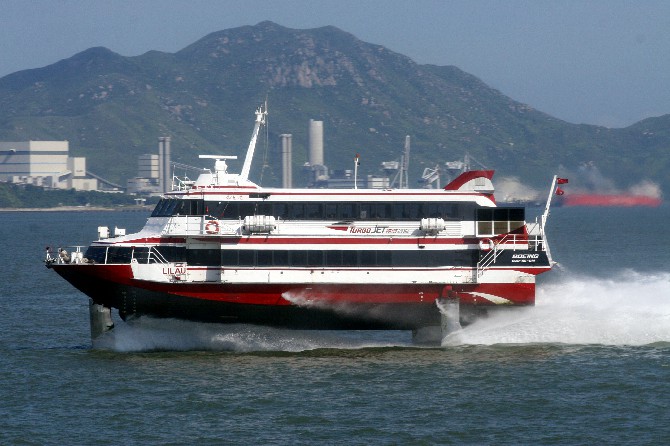 The Lilau, a jetfoil owned by Turbojet, is likely to share the same fate as several other Turbojet Jetfoil vessels: being dismantled for scrap metal.
Concern over the fate of the vessel has arisen following a statement from the Jetfoil Conservation Concern Group, suggesting that Lilau has been sent to the Ocean Shipyard in Hong Kong to be scrapped.
“The Lilau was rolled out of the shipyard with the name covered with black paint. According to our experience, this is a clear sign of an end to its 40 years of service,” the group said in a statement to the Times.
The vessel is a former British Royal Navy Vessel, formerly known as “H.M.S. Speedy,” a Boeing Jetfoil initially designed for use by the British Royal Navy’s Fishery Protection Squadron.
Later the Jetfoil was used in minesweeping and mine-laying trials at Portsmouth on the south coast of England before being decommissioned in 1982 and renamed “Speedy Princess.” After that, the vessel was sold in an auction for USD1 million to Hong Kong’s Far East Hydrofoils where it was transformed into a regular civil use Jetfoil performing trips between HK and Macau.
The launch of the Lilau jetfoil in October 1987 was much celebrated at a party attended by a great number of celebrities from Hong Kong and Macau at the invitation of local tycoon, the late Stanley Ho.
According to the records of the Jetfoil Conservation Concern Group, which is dedicated to the study and publication of the history of the jetfoils, Lilau’s launch celebration was a rare moment: probably the only comparable event was the inauguration of the Madeira, the first Jetfoil in the fleet.
On the outside, the Lilau is hardly distinguishable from any other Jetfoils. However, the Lilau is unique in being the only model 929-115 in the whole TurboJet fleet that did not undergo an upgrade to the Premier Jetfoil fleet.
According to the sailing records, the Lilau’s last trip was in September 2019. After that, the vessel was placed in the shipyard but its foils, lifeboats, and radar were not removed until very recently, the group also stated.
This departs from the procedure adopted when other jetfoils such as the Santa Maria or the Urzela were retired and all their accessories were immediately removed.
The conservation group hinted that the decision to scrap the vessel could be quite recent, coming after the recent announcements that the Hong Kong-Macau maritime route, which has been long suspended, will not be reopened anytime soon.