Political activist Jason Chao was interrogated yesterday by Judiciary Police agents, as he faces aggravated disobedience charges for not complying with an order issued by the Office for Personal Data Protection (GPDP) on Sunday. The president of the Open Macau Society, one of the organizers of an unofficial poll on universal suffrage, told the Times that he is not authorized to disclose the details of his interrogation.
Chao and four other activists were detained on Sunday, while gathering in different locations across town to help citizens vote in the referendum using tablets. All were released later that day, but Jason Chao was referred to the Public Prosecutions Office (MP) on Monday under allegations of aggravated disobedience.
On Sunday, when the referendum was launched, GPDP issued a letter of warning, ordering organizers to stop collecting and processing residents’ data. They were detained for not complying with this order, authorities said.
Jason Chao has disputed these allegations, arguing that GPDP’s order was unlawful. “The referendum is legal and will go on with online voting. The government abused its power [when trying to] suppress the referendum,” he said.
The MP has ordered Jason Chao to report regularly to authorities whilst the case is under investigation. He is not allowed to leave Macau for more than five days without notifying the authorities.
The referendum is still being carried out online, through the macau2014.org website, where 7,239 people had voted by the time MDT went to press. The online voting is set to continue until Saturday. Macau residents have a say on two motions: whether they believe that Macau’s Chief Executive should be elected by universal suffrage in 2019, and whether they have confidence in Chui Sai On.
The results for motion 1 will be announced on Sunday. When asked if they intend to hold a demonstration this coming Sunday, on the same day of Chief Executive’s election, Chao said that announcing the poll’s motion 1 results “will make a great noise” by itself.
The New Macau Association (ANM) is organizing a gathering this coming Sunday at 11:00 a.m. at St. Paul’s Ruins, president Sulu Sou revealed. He told the Times that the gathering’s theme will revolve around universal suffrage and will promote a “Macau land for Macau residents” motto.
ANM did not participate in launching the unofficial referendum, but has supported the cause.
The Open Macau Society, Macau Conscience and Macau Youth Dynamics jointly launched the unofficial poll last Sunday in order to gauge support for democratic reforms.  CP/GY

Chui Sai On’s candidacy representative, lawmaker Vong Hin Fai, has refused to answer questions from a BBC reporter about the civil referendum. The BBC reporter asked Mr Vong whether there is a need to campaign, given that there is only one candidate. Mr Vong said that the campaign “is now underway” and claimed that the reporter should “know Macau’s situation” if she is a Macau resident. “I think in this city, it is well known that now [there] is only one candidate,” Mr Vong said. However, when the BBC reporter asked whether Chui Sai On is behind the crackdown on the civil referendum and whether Mr Vong supports the referendum, he only replied that he would not give any comment on the issue “at this moment.” 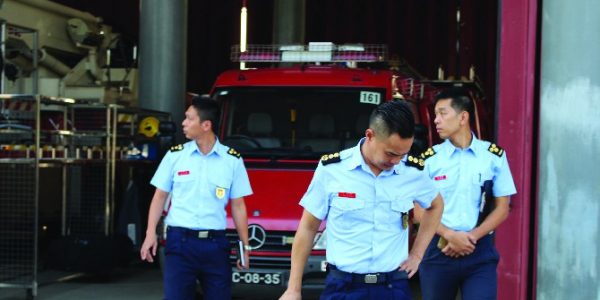