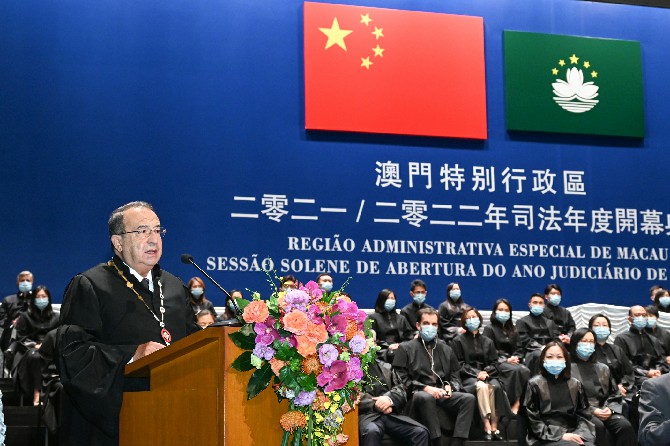 President of the Macau Lawyers Association (AAM) Jorge Neto Valente has openly criticized those profiting from ‘patriotic’ propaganda.
Neto Valente was speaking at the AAM’s opening ceremony for the new judiciary year, held yesterday afternoon at the Macao Cultural Centre.
In his speech, Neto Valente stated that he believes Macau’s status as a Special Administrative Region of the People’s Republic of China has never been under threat, and that patriotic sentiments can be found throughout the population. However, he said that those sentiments are not enough to Macau’s aims and position within China. He rebuked those who have been using their ‘patriotism’ as a means to obtain advantages for themselves.
“We need smart and talented, forward-thinking patriots, able to work for the common good and for the realization of social justice – not just those who with subservience and shortsightedness insistently tout their patriotism to gain notice and advantages for themselves,” Valente said.
He asserted that without the former, it would not be possible to fulfill the objectives of the Central government concerning the political, economic and social development of the Region or the role of Macau in the context of the Greater Bay, nor would it be possible to preserve the city’s platform for relations with Portuguese-speaking countries or the city’s role in the Belt and Road initiative.
Valente also repeated criticisms, made on several previous occasions, regarding the lack of development and innovation of the local courts and judiciary system. His chief concerns were “smart justice” tools and the implementation of advanced electronic solutions to ease the workload on the courts and to deliver faster, better justice.
Neto Valente also noted that during the unprecedented situation the world has been living through for almost two years, the legal community has, like many other professional and commercial sectors, suffered huge losses.
“Due to the isolation imposed by the zero-case health policy, and the ban on entry to non-residents, the slowdown in economic growth was inevitable, and many small and medium-sized companies face difficulties that not all will be able to overcome. The downturn in business is peaking, and has led to the reduction and complete halt of many activities, with negative consequences in terms of jobs and savings,” he remarked.
Valente called for a change to the current health policies, and special support for liberal and independent professionals.

Some lawyers excluded from ceremony
During his speech, the AAM President did not forget the recent debate concerning the need for a vaccination record for those participating in several events.
Neto Valente noted that several lawyers had been barred from participating in the official opening ceremony of the judicial year due to this policy.
At the top of his speech, Valente remarked that, for the first time in the last 20 years, some lawyers could not participate in the ceremony due to access restrictions informed by the Covid-19 pandemic, and he expressed hope that such restrictions would soon end.