Jury calls on IFFAM to act as platform for emerging directors 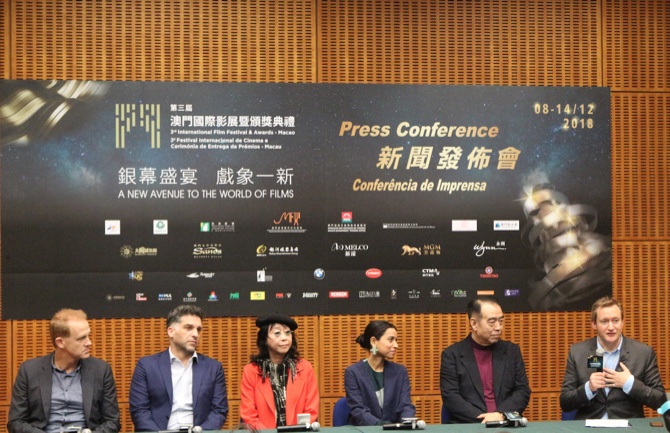 The main jury of the third International Film Festival and Awards Macao (IFFAM) commended the event for featuring films directed by young directors, thus calling on the festival to be a platform for emerging directors.

At a press conference held yesterday at the Macau Museum of Art, the jury recalled the first films and film festivals they had participated in at the beginning of their careers.

For Chen, who is the president of the jury, his first movie “King of Children” was initially introduced at the Cannes Film Festival.

“I knew nothing about Cannes […] I was like an idiot just looking around without any idea of what was going to happen. I did not really expect to win an award but I learned a lot,” Chen told the press.

“I was encouraged by the main festivals and I hope IFFAM can do the same for the younger generation of filmmakers,” he added.

Chen is a leading figure in the Fifth Generation of Chinese cinema and is the only Chinese filmmaker to have won the Palme d’Or at Cannes, which he won for Farewell My Concubine in 1993.

When commenting on the competition section of this year’s IFFAM – which highlights movies that have been directed by young filmmakers for the first and second time – Chen commended the directors, describing their films as “poetic.”

“I can see some new talents just coming out and [it is] something different from other generations. I think that some of them did really well from an artistic point of view. You can see that their movies are kind of poetic,” the Golden Globe winner said,
“There are a lot of new talents. Whether they studied at Beijing Film Academy or not, there is a voice from them. I think it’s wonderful [as] everybody knows that the market is becoming bigger […] so [we] need to continue to make good movies,” he added.

This year, IFFAM’s competition focused on the first and second movies of young filmmakers.

His movie “No Man’s Land” won the screenplay prize at the 2001 Cannes Film Festival, and won the Academy Award and Golden Globe for best foreign language film in 2002.

“What happens when you make your first film that is good is it puts you in the spotlight. It’s not easier to make it, but at least people know about you, and it’s never easy to get money to make films, but at least there are some people who are interested that come and try to help you,” said the Oscar-winning Bosnian director.

“I was joking the other day that Bosnia is a country with 3 million people and a good movie might not be seen by a lot of people, [while a] bad film in China at least will be seen by 50 million [people],” Tanovic joked.

Meanwhile, Currie remarked that it is important for film festivals to be open to new voices and their ways of telling stories to audiences.

“I love that [the festival features] first- and second-time directors. I think they are really in a critical time in their career to reach a spotlight and have a focus on them. We can make a huge difference,” said Currie.

“I think it’s wonderful when festivals really look at next generation talents because our industry keeps growing and gets better. There are richer stories, more access but different cultures,” he added.

Meanwhile, Cheung remarked, ”I can see the energy and lack of burden and their willingness to try. Everything is new so we should approach every film like them.”