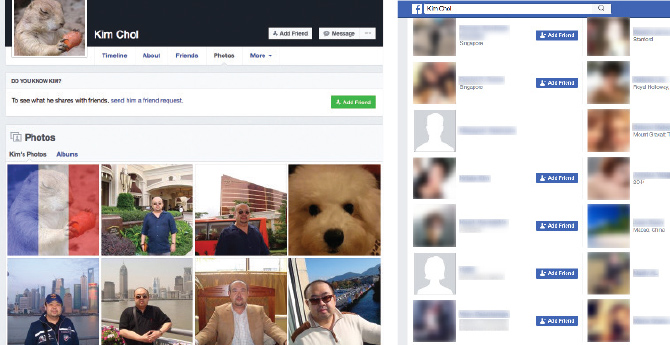 Two screensshots of the personal Facebook page of Kim Chol as viewed by MDT around 8pm yesterday, showing selfies in Macau and another page of over 100 of his “friends” (we blurred the people for privacy)

A Facebook account that appears to be owned by the recently assassinated half-brother of the North Korean leader has surfaced under the alias confirmed by Malaysian authorities, Kim Chol.

The account contains around a dozen pictures of the self-exiled eldest son of Kim Jong Il, which were publicly accessible to the public. The pictures, dated from between 2008 and 2010, depict him at several locations in Macau, including outside easily identifiable integrated resorts. Others show him in Shanghai and Geneva.

However, the account had been closed down or made unavailable by 9 p.m. last night, with only a warning posted: “Sorry, this content isn’t available at the moment.”

According to information on the Facebook account, Kim studied at the International School of Geneva in Switzerland and Russia’s Lycée Français Alexandre Dumas de Moscou.

He was also a friend of Macau lawmaker Chan Meng Kam on the social media platform.

Kim Jong Nam was regularly spotted in Macau but accounts of his lifestyle vary. While some report having seen him with a “heavy security presence” in VIP rooms at a popular bar in Taipa in 2011, others claim that he lived a mostly “low-key” lifestyle that was “far from luxurious.”

Kim Jong Nam used numerous aliases to protect his identity, including Kim Chol. Malaysian authorities confirm that the man who was assassinated in Kuala Lumpur airport on Monday carried the passport of a North Korean with the same name.

A source told the South China Morning Post yesterday that some Macau-based friends of Kim Jong Nam had called him “John”. The friends were due to meet him in Macau for dinner on Tuesday, however received news late that night of the alleged assassination. DB