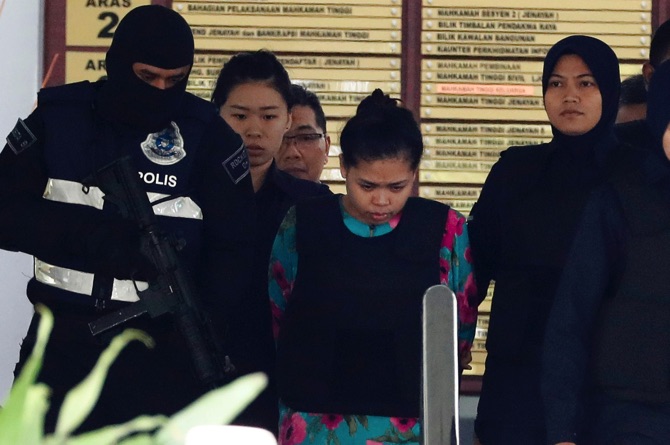 A Malaysian judge and court officials wore face masks and surgical gloves in court yesterday as samples were admitted as evidence of where VX nerve agent was found on the body and clothing of the estranged half brother of North Korea’s leader.

On the third day of the murder trial of the two women accused of poisoning Kim Jong Nam, government pathologist Mohamad Shah Mahmood said chemist tests detected VX, as well as VX precursors and VX byproducts, in Kim’s eye mucus, on his face, in his blood and urine, and on his clothing.

Prosecutors and defense lawyers then took a 20-minute break to examine those samples, which were sealed in transparent plastic bags. Most of them wore gloves and masks as a safety precaution after prosecutors warned the VX-tainted items may still be dangerous.

After the break, Judge Azmi Ariffin also covered himself as the samples were officially admitted as evidence.

The two suspects, Siti Aisyah of Indonesia and Doan Thi Huong of Vietnam, have pleaded not guilty to murder charges that could bring the death penalty if they are convicted. They have not testified but their defense has said the women believed they were playing a harmless prank for a hidden-camera TV show and were tricked by men suspected of being North Korean agents.

Prosecutors also yesterday sought to show VX was the sole cause of death. Mohamad Shah said toxicology tests found six types of drugs in Kim’s blood that are used to treat diabetes, hypertension and gout. But he said those drugs and those conditions would not have caused Kim’s swift death. He also said the autopsy found no sign Kim had a heart attack.

Mohamad Shah said his conclusion that Kim died of “acute VX poisoning” was based on a chemist report of the presence of VX and the swiftness of death. Earlier testimony showed Kim died within two hours of being attacked in a crowded Kuala Lumpur airport terminal, not within 20 minutes as earlier stated by Malaysia’s health ministry.

The pathologist said the VX was most likely applied on Kim’s face and eyes, where the nerve agent was detected, with the fastest absorption through the eye mucus. “VX is very toxic and it acts fast. There is a very slim chance of survival,” he said.

Under cross-examination by defense lawyers, Mohamad Shah admitted he has limited knowledge of VX and nerve agents in general. He said he didn’t know the amount of the poison that was used.

The judge earlier in the day upheld his ruling to remove sections of the post-mortem report that defense lawyers said were hearsay or unproven.

Prosecutor Wan Shaharuddin Wan Ladin asked for the case history provided by the investigation police officer and clinical history by the airport doctor and a government doctor to be reinstated. He said the information is not hearsay or prejudicial as the policeman and doctors would be called to testify.

Part of the expunged section says that two females swiped Kim’s face with a “dangerous fluid” at the airport.

Ariffin told prosecutors they could seek a revision of his ruling at the end of their case.

Hisyam Teh Poh Teik, the lawyer representing Huong, slammed the “complete U-turn” by prosecutors and said it was unacceptable as the court has ruled already.

On Tuesday, the court heard from doctors who treated Kim. They said he arrived at the airport clinic in pain with very high blood pressure and pulse, his vital signs deteriorated sharply and he was dead on arrival at the hospital. Pathologists testified that Kim’s symptoms were consistent with VX exposure and that his internal organs showed damage from VX.

The nerve agent is banned by an international treaty as a weapon of mass destruction. But it is believed to be part of North Korea’s chemical weapons arsenal. Kim was the eldest son in the current generation of North Korea’s dynastic rulers but was believed to have been an outcast who had lived abroad for years. He reportedly never met current leader Kim Jong Un, who is widely believed to have perceived his sibling as a threat and targeted him for assassination.

The trial is being closely watched by the Indonesian and Vietnamese governments, which hired the defense lawyers for both women. Eileen Ng, Malaysia, AP