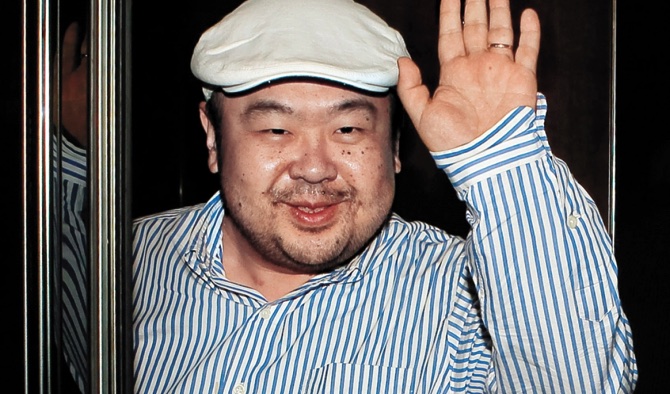 Kim Jong Nam, the older brother of North Korean leader Kim Jong Un, was attacked at Kuala Lumpur’s airport and died on the way to a hospital, a senior Malaysian official said yesterday.

The official, who spoke on condition of anonymity because of the incident’s diplomatic sensitivity, said Kim Jong Nam was sprayed with a liquid in the shopping concourse on Monday and sought help at an information counter, complaining of pain. He was taken to the airport clinic and then died en route to the hospital, he said. District police chief Abdul Aziz Ali said the man was waiting for a flight to Macau.

Kim Jong Nam reportedly fell out of favor in North Korea after being caught trying to enter Japan on a false passport in 2001, saying he wanted to visit Tokyo Disneyland. He was believed to be in his mid-40s and has reportedly been living in recent years in Macau, Singapore and Malaysia.

South Korean media reported that Kim Jong Nam was assassinated by two women. TV Chosun, citing unidentified “multiple government sources,” said the women were believed to be North Korean agents. It said they fled in a taxi and were being sought by Malaysian police.

Since taking power in late 2011, Kim Jong Un has executed or purged a slew of high-level government officials in what the South Korean government has described as a “reign of terror.”

Kim Jong-nam, starting from around 2001, spent most of his time living quietly in Macau with his immediate family. He was believed to live in a luxury dwelling between the beaches of Hac Sa and Cheoc Van with a sunflower plaque on its exterior symbolizing loyalty to the North Korean regime.

He was also believed to own another apartment in downtown Macau, close to the Military Club.

It was reported by Ponto Final in 2009 that his children were members of the Macau Lusophone Scout Group, though organizers of the association had declined to confirm this.

Kim Jong-nam told Japan’s Asahi TV in 2010, shortly before his father died, that he was against “third-generation succession” and that it had only been proposed to support the stability of the secretive regime. “I hope my younger brother will do his best for the sake of North Koreans’ prosperous lives,” he said at the time. DB, with AP

‘A continuing sense of paranoia’

Mark Tokola, vice president at the Korea Economic Institute in Washington, said it would be surprising if Kim Jong Nam was not killed on the orders of his brother, given that North Korean agents have reportedly tried to assassinate Kim Jong Nam in the past. “It seems probable that the motivation for the murder was a continuing sense of paranoia on the part of Kim Jong Un, which may be a well-placed paranoia,” Tokola wrote in a commentary yesterday. Although there was scant evidence that Kim Jong Nam was plotting against the North Korean leader, he provided an alternative for North Koreans who would want to depose his brother.