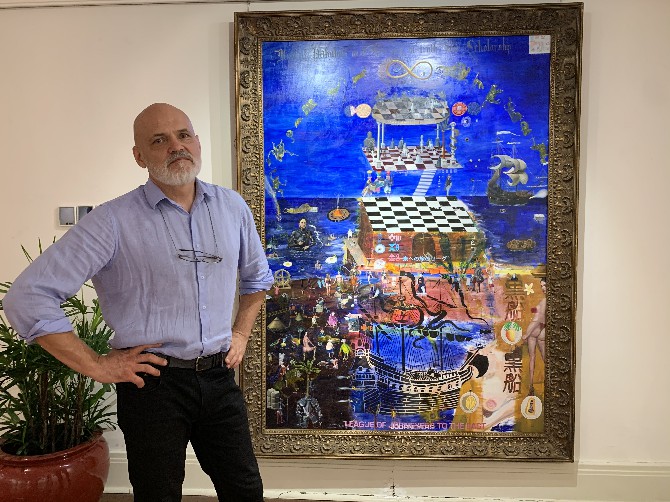 With the pandemic causing the closure of borders and mandatory quarantine once more returning to the city, the yearning to voyage has been intensified.
Macau-based Russian artist Konstantin Bessmertny, who has been fixture on the Macau art scene since 1992, had titled his ongoing art exhibition, “Voyage 2021,” a conceit that plays on social conditions whereby staying put in a place has become the norm.
Voyage 2021 invites the public to see a different reality through the eyes of the artist. Although the exhibition does not travel to different places – it does allow the public to travel in the same space: exploring different scenarios at different timelines.
Speaking to the Times, Bessmertny expressed his passion for creating different narratives in a series of layers – creating another reality in the mindset of the viewers.
“It is the duty of the artist to create his own reality, and people believe or are comfortable – or uncomfortable – but at least it’s another statement,” said the artist. 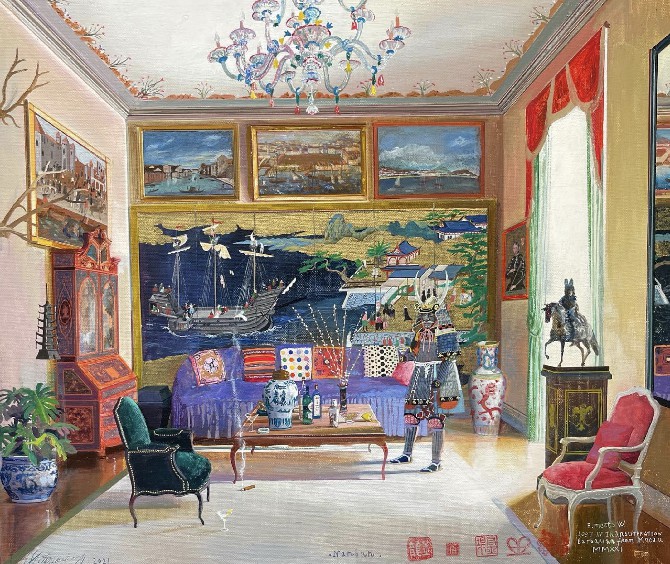 The ongoing exhibition features pieces which date back in 1996, large-scale artworks which were part of the Art Biennale, and few which were inspired by his recent stay at Koh Samui: a trip Bessmertny made before staying put in Macau, since undergoing quarantine is not something that can be repeated.
The arts industry is one of many industries that have been devastated amid the ongoing pandemic given that Covid-19 cases in the region have led to shutdowns of public cultural spaces in line with the government’s aim to deter the spread of the virus.
The last shut-down occurred in September, when the government closed its cultural venues and cancel various arts and cultural activities due to the string of cases that were discovered.
During the peak of the pandemic early last year, the government also shut down public venues, and only gradually reopened them. This meant that different kinds of artistic performances and exhibitions were either cancelled or postponed.
For Bessmertny, having had a significant number of solo exhibitions in Europe and Asia, this year’s exhibition is to “keep myself in shape.”
“The Art Biennale exhibition was half of the time closed [due to the pandemic]. People like to have real experience now. This is the second year [we’re in the pandemic] and I’m here to keep myself in shape,” said the artist. 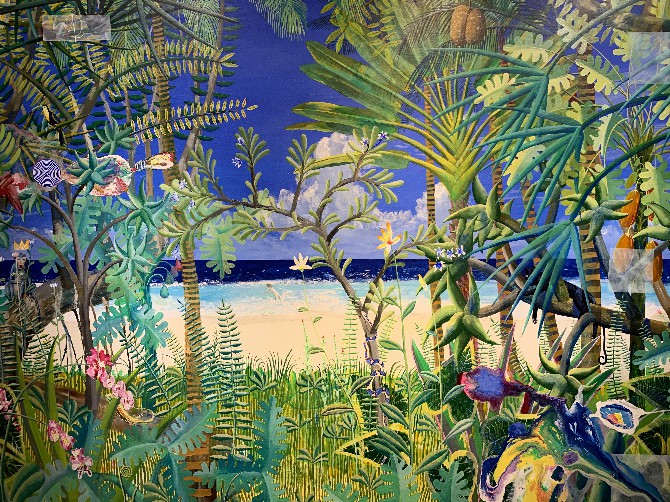 Close to impossible
Local artists – particularly emerging ones – may already have had difficult time holding their own exhibitions prior the pandemic. Now this is an even greater hurdle.
According to Bessmertny, Macau is one of the best places to create art, citing support and resources provided by the government.
However, to make a sustainable living out of merely producing artworks and showcasing them is another question that could frankly be answered as “close to impossible.”
“It’s close to impossible to build it up as sustainable profession. [It will be] close to impossible to survive,” he said.
“In the pop culture and in the ‘winner takes all’ economy, only a few survive. It’s sad to say but [with] the ratio [of artists and general public], it’s quite difficult. How many artists does Macau need?” Bessmertny asked.
In his view, an artist should ideally hold a solo exhibition in Macau only once in three to five years.
“If you exhibit three times a year, it’s a disaster. You overproduce, you overexpose and the effect is negative,” the artist explained.
Bessmertny said that the plans of emerging artists who are moving to Hong Kong in the hopes that there are more opportunities there, are unrealistic, since there already are lot of younger artists in Hong Kong who are also trying to survive.

Next project: Macau history
Bessmertny is currently contemplating a new project that tells the history of Macau. Although two artworks related to this theme are currently showcased at Voyage 2021, this time the artworks would be installations done created according to a Japanese technique.
“It’s about what Praia Grande looked like in the 1600s, prior the arrival of the Portuguese. I’m bringing justice to historical events because there were no paintings made at the time,” he explained.
The artworks are currently on display at Clube Militar de Macau until November 6.