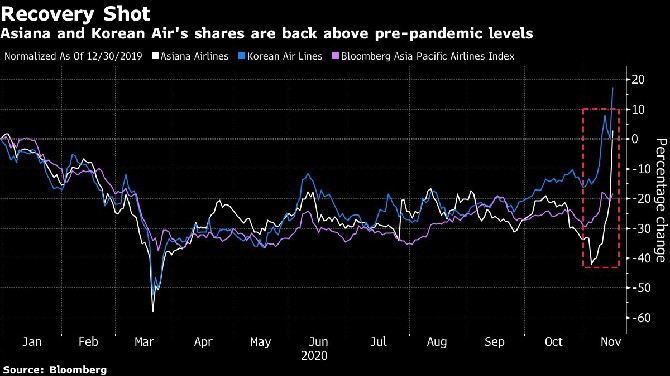 South Korea’s two biggest airlines plan to merge, with Korean Air Lines Co. acquiring Asiana Airlines Inc. for 1.8 trillion won ($1.6 billion) following an injection via its parent, Hanjin Kal Corp.
The main goal of the acquisition is to stabilize South Korea’s aviation industry amid the coronavirus pandemic and improve its competitiveness, said Hanjin Group, which operates airlines and logistics businesses through its subsidiaries. It expects Korean Air to be ranked as one of the world’s top 10 airlines once the deal is completed.
“In general, countries with a population less than 100 million have a single full service carrier,” Hanjin said in a statement. “However, Korea has two full service carriers, which gives it a competitive disadvantage compared to countries like Germany, France and Singapore with a single major airline.”
The merger should streamline route operations and lower costs, while the consolidation of slots at Seoul’s Incheon International Airport may increase joint ventures with global airlines and demand for transit flights, the parent company said. That should also spur growth in the domestic aviation industry.
“Korean Air’s acquisition and the expansion of its routes, fleet and capacity will give the airline the competitiveness to compete with global mega airlines,” Hanjin said.
Asiana and Korean Air both soared on the stock exchange yesterday. Asiana’s shares rose just under 30% to their highest since Dec. 26, while Korean Air closed with a gain of over 12% after earlier jumping as much as 26%, the most on record. The pair are back above where they were at the pandemic’s onset in January. Hanjin Kal rose 5.7%.
Korean Air plans to issue new shares in early 2021 to raise 2.5 trillion won. Hanjin Kal will participate in the issue after receiving 800 billion won from Korea Development Bank, which it will transfer to Korean Air. The airline will invest 300 billion won of that to buy perpetual convertible bonds from Asiana and another 300 billion won as a down payment on a 1.5 trillion won contract to buy new Asiana shares, according to the statement.
“Korean Air’s initial investment will enable Asiana Airlines to secure the funding needed for operations until the end of the year, as well as improve its financial position by adding 300 billion won worth of perpetual convertible bonds to its capital assets,” Hanjin said.
State-run Korea Development Bank said earlier yesterday that it hopes to complete the transactions this year and seek approvals from antitrust bodies globally by the end of 2021. The bank will likely own about 10% of Hanjin Kal, according to Hanjin Group.
Kumho Industrial terminated talks to sell a 31% stake in Asiana to HDC Hyundai Development Co. in September after the parties failed to agree terms as the pandemic threw valuations into doubt.
Airlines around the world have been plunged into crisis because of the coronavirus and its impact on travel. Founded in 1988 to compete with Korean Air, Asiana flew to 61 cities in 21 countries prior to Covid-19. It has two budget carriers, Air Seoul and Air Busan.
Korea Development Bank said Hanjin may look at consolidating low-cost carriers after the Asiana acquisition. Hanjin Kal is the parent of budget operator Jin Air Co. MDT/Bloomberg 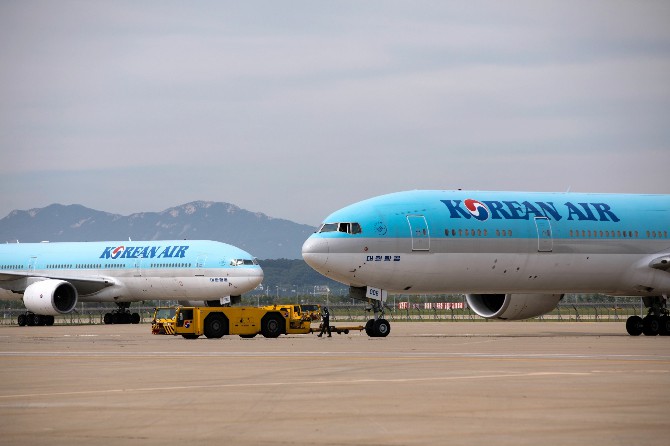