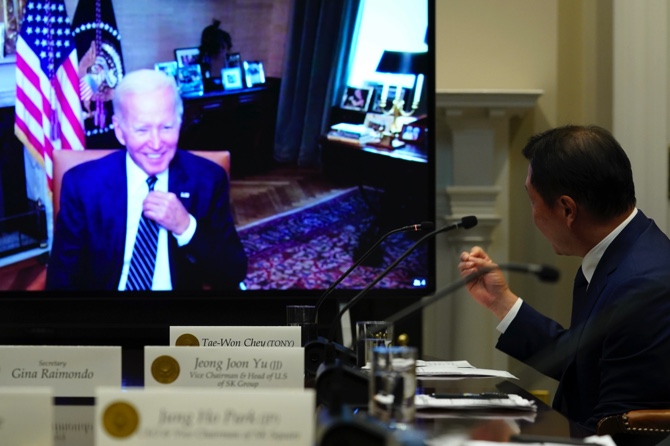 South Korea’s SK Group yesterday [Macau time] announced plans to invest $22 billion in the United States on industries including semiconductors, green energy and bioscience, which the White House said will create tens of thousands of domestic jobs while helping ease global supply chain snarls that have persisted during the coronavirus pandemic.

President Joe Biden, who continues to isolate in the White House residence after testing positive for COVID-19 last week, met virtually with SK Group Chairman Chey Tae-won and called it a “historic and pathbreaking announcement.”

It is “proof that we’re meeting the emergency in the climate crisis with urgency and opportunity and innovation to save the planet and create good-paying jobs,” Biden said.

SK Group’s investments will include $15 billion in the semiconductor industry through research and development programs, as well as materials and a testing and packaging facility, which will help address supply chain problems, the conglomerate said in a statement.

Another $5 billion will go to green energy businesses, including electric vehicle charging stations, green hydrogen production and battery materials and recycling, SK Group said. The final batch, which the company described as worth “several billions of dollars,” would go toward biotechnologies developing new drugs designed to bolster competitiveness in the U.S. pharmaceutical industry.

SK Group had already previously said it would invest $7 billion for new facilities that produce batteries for electric vehicles in Tennessee and Kentucky, as part of a joint venture with Ford Motor Co.

The announced investment is part of the Biden administration’s efforts to reduce the impact of supply chain bottlenecks around the globe, which the administration says are helping fuel record-high inflation. The White House is also championing a proposal advancing through Congress designed to boost the computer chips industry and high-tech research in the United States.

During a virtual meeting with industry and union leaders on Monday, Biden called semiconductors “the building blocks for the modern economy.” MDT/AP