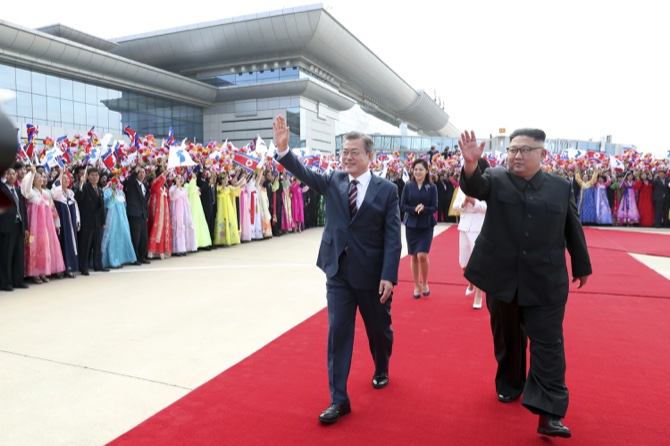 In pursuing engagement with North Korean leader Kim Jong Un to defuse a nuclear crisis, Moon is also looking to bolster the legacy of his late friend and political mentor, former President Roh Moo-hyun, whose ambitious efforts to build trust with North Korea crumbled as it began building its nuclear arsenal a decade ago.

A dovish liberal, Moon said he will use the meetings with Kim in Pyongyang, North Korea’s capital, which began Tuesday and are to end today, to help revive stalled talks between the U.S. and North Korea and push for “irreversible, permanent peace” between the rivals. Depending on the results, Moon will either be remembered as a skillful statesman who helped fix decades of failed diplomacy or a stubborn idealist who repeated the mistakes of past liberal leaders at a time of much higher military and political stakes.

Moon was enthusiastically greeted by Kim on Tuesday as he became the first South Korean president to visit Pyongyang in 11 years, since Roh made his own trip north. The two leaders tightly embraced at the airport in front of a military honor guard and thousands of people cheering and waving flowers and flags.

It was a much warmer welcome than what Kim’s late father, Kim Jong Il, arranged for Roh in October 2007. Kim Jong Il didn’t come to the border to greet Roh, who crossed into North Korea by land, and later shook hands with Roh with what looked like less than complete enthusiasm before a summit that took place amid turbulent nuclear negotiations following the North’s first nuclear test explosion in 2006.

But Moon faces much higher stakes in his latest summit with Kim, their third this year, as the South Korean tries to save global diplomatic efforts to resolve the nuclear standoff with the North. Roh’s inter-Korean engagement came at a time when the North Korean nuclear threat was relatively weak. Moon is dealing with a North Korea that could already have dozens of bombs and a growing arsenal of ballistic missiles, including intercontinental-range weapons that may be able to reach the U.S. mainland.

Roh’s meeting with Kim Jong Il came near the end of the South Korean’s single presidential term, and so any results were destined to be short-lived. South Koreans, angry over North Korea’s nuclear ambitions and the engagement policies pursued by a succession of liberal governments, voted in a conservative leader in 2007 who upended Roh’s policies. Roh leaped to his death the following year after being investigated for corruption. A grim-faced Moon read out a press statement about his friend’s death.

Moon, who had a leading role in building Roh’s inter-Korean policies as his chief of staff, didn’t go to the 2007 summit. His efforts for engagement have received much stronger support than Roh’s. Moon’s previous summits with Kim in April and May at the inter-Korean border, which also set up a June summit between Kim and U.S. President Donald Trump, brought a tentative detente following a string of North Korean nuclear and missile tests last year that fanned war fears among South Koreans.

But Moon now faces perhaps the biggest challenge of his diplomacy because talks between Washington and Pyongyang have sputtered since the June summit, raising doubts about Kim’s supposed willingness to relinquish his nuclear arsenal and putting pressure on Moon to broker progress once again. This week’s inter-Korean summit will likely be a crucial indicator of how the larger nuclear negotiations with the United States will proceed; Moon’s chief of staff, Im Jong-seok, has downplayed the possibility of a significant breakthrough.

“When former President Roh Moo-hyun visited North Korea in 2007, the meeting was focused on inter-Korean issues because the nuclear issue was dealt with in the six-party talks,” Im said on Monday, referring to now-stalled nuclear negotiations involving the Koreas, the United States, China, Russia and Japan. “But this time, the heavy issue of denuclearization presses down on the summit meeting. This makes us very cautious, and it’s hard to make any optimistic prediction about the summit.”

Moon, a son of North Korean war refugees, won a presidential by-election in May last year following the removal of his conservative predecessor over a corruption scandal. He has been a harsh critic of Seoul’s previous hard-line policies, which he says did little to stop the North’s nuclear advancement while significantly reducing the South’s voice in international efforts to deal with the crisis.

Moon has preached engagement even during the height of tensions.

Two days after North Korea flight-tested its first intercontinental ballistic missile in July last year, Moon vowed to build on the legacies of Roh and his liberal predecessor Kim Dae-jung. Roh and Kim’s “Sunshine Policy” and economic inducements resulted in two historic summit meetings and a temporary rapprochement between the Koreas in the 2000s. Critics say the policies gave North Korea a lifeline while it pursued its nuclear dreams. 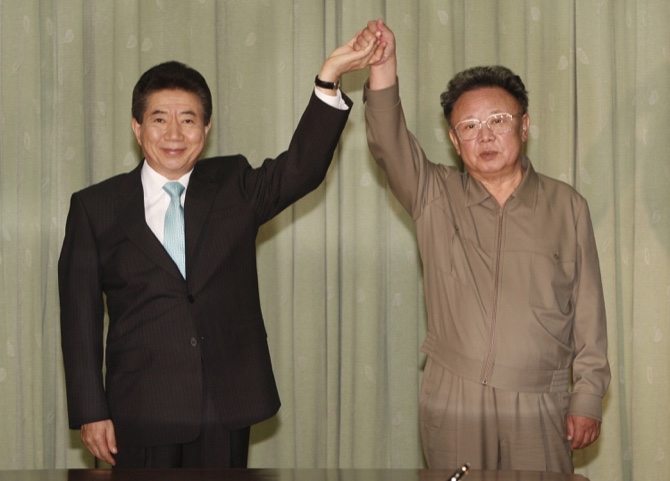 If the inter-Korean summit fails to produce concrete results and U.S.-North Korea talks begin to derail, some experts believe Moon will face a serious political dilemma over whether to continue to engage with the North or join another U.S.-led high-pressure campaign against it.

Moon has so far maintained a coordinated approach with Trump on North Korea, staying mostly firm on sanctions and offering vocal support last year to Trump’s pressure campaign during North Korea’s weapons tests. While reaching out to North Korea in past months, Moon has credited Trump at every step, even endorsing him for the Nobel Peace Prize.

But for Moon, it would be extremely difficult to accept a return to the animosity of 2017. Moon’s popularity has declined sharply in recent months and he can ill afford a setback in inter- Korean relations, his main issue of strength. Pyongyang has already expressed frustration to Seoul about the slow pace of cooperation projects in railways, roads and forestry, which are held back by U.S.-led sanctions against the North.

Some argue that Moon has ample reason to continue engagement and maintain peace and stability because North Korea’s nuclear weapons are just one of the many security concerns facing South Korea. There’s also fear of the sporadic military tension that has led to occasional bloodshed between the rivals. While showing unease about the North’s development of ICBMs, the United States, unlike its ally, doesn’t have to worry about a barrage of artillery raining down on its cities.

In recent speeches, Moon has said that relations between the Koreas “are not by-effects of progress in the relationship between North Korea and the United States,” and that advancement in inter-Korean ties could bring progress on denuclearization.

Moon’s huge entourage in Pyongyang includes CEOs of the country’s biggest companies, a possible sign that Seoul is preparing for the resumption of inter-Korean economic cooperation projects if diplomacy eventually yields results.

But other experts say Moon fears a split with Washington because Seoul would be forced from the “driver’s seat” in diplomatic efforts to deal with the North. Any leverage South Korea has over North Korea, they say, comes from its relationship with the United States, which holds the keys to what Pyongyang desires most: sanctions relief and security assurances.