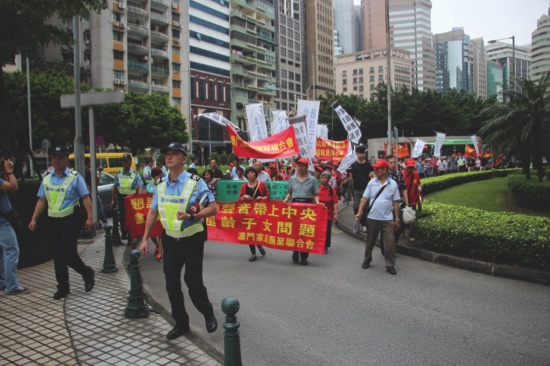 Fewer people than in previous years took part in the traditional May 1 marches that mark the International Workers’ Day.
Some of the issues the demonstrators called the government’s attention to included the extension of the government’s annual handout, securing the local labor market, fostering employees’ development, and the introduction of longer maternity leave and paid paternity leave.
According to data provided by the police after the marches ended, around 580 people participated in the march which begun at the Iao Hon market and concluded at the government’s headquarters, where representatives of various associations and unions handed in a petition letter to the government.
The Federation of Trade Unions held a gathering at Tap Seac Square, calling on the government to improve workers’ employment rights, create a well-established labor law, and improve the legal system and employer-employee relations. The union claimed that around 1,200 residents joined the demonstration, however the police estimated there were around 550 people.
In addition to demanding the resolution of such concerns, a spokesperson for Forefront of Macau Gaming reported that the government should strive for more stability in the gaming sector, stating that there are still unresolved issues from 2015.
“Since the gaming income has dropped, the situation has changed. However, there are still important issues from last year such as the casino smoking ban, the matter of overlapping holidays and the quitting mechanism,” said the spokesperson, according to a report by TDM.
To call for the protection of Coloane Island, Macau Youth Dynamics members wore lung-shaped masks and represented real estate interests by carrying a model of Coloane on a gurney being threatened by a dinosaur.
About 100 distressed taxi drivers also joined the demonstration in the morning to protest against “unfair profiling of the industry,” which came after the new set of proposals to regulate the sector, including the use of undercover police officers and sound recording, which would be permissible in court.
The group calls for the government to review its stance on the proposals, accusing authorities of “unjustly” profiling the sector based on offences committed by only 40 of the region’s approximately 1,000 taxi drivers.
“We find it unfair that taxi owners will be affected by the violations of a few other drivers. The proposal to resort to undercover police officers, for example, targets this industry alone. That is a way of profiling,” complained Au Iat Sun, spokesperson for the Professional Taxi Driver Federation. Staff reporter