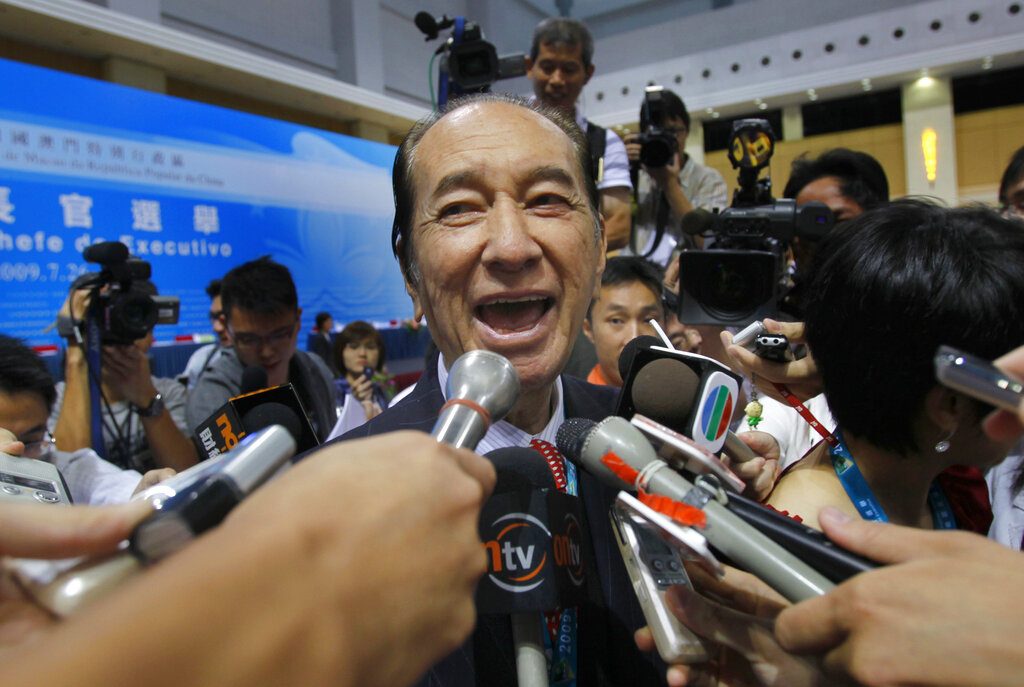 In this file photo taken on July 26, 2009, Macao tycoon Stanley Ho, talks to reporters after the Macau chief executive election in Macau

At 98-years, Stanley Ho passed away in Hong Kong yesterday, not living long enough to see the opening of the last property of the empire he helped to build, the Grand Lisboa Palace in Cotai. A family statement said he died peacefully in his sleep, but did not give a cause of death.
Tall, handsome and of mixed Chinese and European heritage, Ho fathered 17 children with four women, an extended family that engaged in high-profile squabbles over his legacy during his later years.
A nephew of one of Macau’s as well as Hong Kong’s most influential people in both business and philanthropy – Sir Robert Ho Tung – Stanley Ho Hung-sun was a Hong Kong and Macau business magnate and best known for being Macau’s first and most influential gaming tycoon.
Founder and Chairman of SJM Holdings until 2018, when he officially retired, leaving the company in the hands of his daughter Pansy Ho, Stanley built up an impressive portfolio of investments, owning a total of nineteen casinos in Macau, including the historic Hotel Lisboa.
Over the years, Ho was nicknamed the “King of Gambling,” an unofficial title that gained fame during the government-granted monopoly era he held for about 40 years.
Another company that he established, Shun Tak Holdings, where he held the post of Chairman Emeritus, issued a statement to officially confirm the tycoon’s death on behalf of the company.
“Dr Ho has been a respected personage of virtue, vision, innovation, and invincibility,” the statement said.
Ho was regarded as an example, the statement noted. “Dr Ho has educated and inspired us a lot,” it said. He has taught people to thirst for knowledge and yearn for exploration, according to the statement.
“He has also reminded us to treasure our culture and our traditions, as well as to love our country,” noted the statement.
The family said that although they understood the day would eventually come, the pain cannot be described.
“The departure of a philosopher has left inexplicable devastation,” ended the statement.
NO EASY START
Despite being born into privilege, his story did not have a smooth start. On November 25, 1921, the future tycoon was born to parents of wealth. His father was a comprador at E.D. Sassoon & Co., which later became a founding stakeholder of the Hong Kong and Shanghai Banking Corporation. His mother was a daughter of a wealthy family.
The tycoon received his education at Queen’s College in Hong Kong, before successfully enrolling in the University of Hong Kong with scholarships. The story did not develop well, for his father was forced to leave Hong Kong for Vietnam due to financial problems. After, his mother had to pawn her jewelry to raise him.
In 1941, when Japan invaded Hong Kong, Ho was left no choice but to flee the city to Macau, which was declared to be neutral by the then Portuguese government. He was hired by a grocery company in Macau owing to his aptitude for English.
A large bonus was awarded to him two years later when he risked his life to save the contents of a cargo ship. He allegedly faced gunfire and a grenade while carrying out his duties.
With the large bonus, he set foot in the fuel refinement industry. The refinement company became a main supplier for the Macau power plant in those days. His business became so successful that it attracted the interests of a local gangster.
The gangster negotiated with Ho on a partnership. Later threatening him, the gangster deployed gunmen to the refinement plant to intimidate him.
In 1953, the gangster expelled Ho from Macau, threatening to take his life if he refused to leave the city. Despite leaving unwillingly, he felt determined to return when the tensions eased.
Back in Hong Kong, he invested widely in real estate. Prior to his arrival, residential properties in Hong Kong were sold as entire buildings. He made himself a pioneer in breaking down the titles and selling properties per unit.
The time then came for him to be allowed to return to Macau. It was then that the Portuguese-Macau government, as it then was, decided to reopen the bid for casino operations.
Partnering with late businessmen Henry Fok, Teddy Yip and Yip Hon, Ho succeeded in bidding for the concession.
His enemies threatened to kill him once again, apart from seven other astonishing threats, with the most famous, or infamous, being the gathering of crowds of beggars at the entrance of Ho’s new casino. Ho’s reaction was to offer free rice with Char-siu – Cantonese barbecued Pork – to the beggars.
Meanwhile, he spread the word that whoever could kill the conspirer of his death would be awarded 1 million patacas. The move created a stalemate situation.
After breaking these ties, Ho moved on to build his empire but transformed the then-existing Estoril Swimming Pool into a casino on New Year’s Day, 1962. In May of that year, the four businessmen inaugurated the Sociedade de Turismo e Diversões de Macau, more commonly known as the STDM, which has played an essential role in Macau’s tourism industry.
Eight years later, on June 11, 1970, STDM opened Macau’s first 5-star hotel, the Hotel Lisboa, which houses the globally-renowned Casino Lisboa. 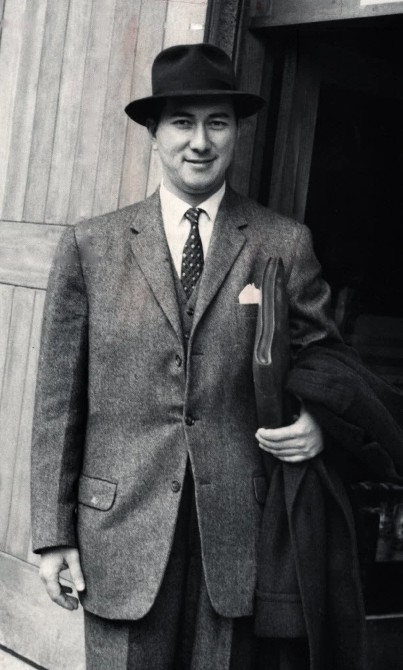 FAMILY COMPROMISE
Stanley Ho was also the founder and Chairman of Shun Tak Holdings, through which he owned a large portfolio of businesses including entertainment, tourism, shipping, real estate, banking, and air transport. Some of these businesses have already been carved up among his descendants.
In 1948, Ho married Clementina Leitao, daughter of a prominent lawyer in Macau with ties to Portugal and to Macau high society, connections that may have helped him win the casino monopoly in 1962. About the same time, Ho married Lucina Laam under a Qing dynasty code allowing men to take multiple wives that Hong Kong outlawed in 1971.
Ho fathered children with two other women, Ina Chan and Angela Leong, whom he also referred to as his “wives.” Ho reportedly met Chan, a nurse, when she was hired to care for Leitao, who died in 2004.
He met Leong, a dancer and former ballroom dancing instructor, through his love of dance.
The decline of Stanley Ho at the helm of his business empire started when, in July 2009, the magnate suffered a stroke that left him partially incapacitated for a long period of time and left him with permanent ailments from which he would never fully recover.
During the long period of recovery that followed his hospitalization, Ho was away from the limelight and consequently far from the leadership of the companies, leading to the decision in 2010 of taking his first steps in the delegation of powers and sharing of wealth among his closest family.
A family feud saw several branches of the family pitted against one another, leading to an uneasy compromise arranged by Ho himself.
Ho disputed a supposed transfer of his entire stake to five of his children and one of his wives, calling it a “robbery” contrary to his desire to divide the fortune equally among various family members. The dispute eventually was settled after several lawsuits, and Ho transferred most of his SJM shares to family members while officially remaining chairman.
In this process he granted his daughter Pansy, son Lawrence and wife Angela significant shares of the business and, with that, net values of USD5.3 billion (MOP42.3 billion), USD2.6 billion (MOP20.8 billion) and USD4.1 billion (MOP32.7 billion), respectively, according to Bloomberg Billionaire Index.
According to estimations made in 2018, when he stepped down from the leading role, his businesses employed around 25% of all Macau’s workforce.
Apart from Hong Kong and Macau, the companies held by Stanley Ho also possess several investments in the mainland, as well as abroad, in countries such as Portugal, North Korea, Vietnam, the Philippines, Mozambique, Indonesia, and East-Timor, among others.
After he stepped down at the age of 96, his public appearances decreased and on several occasions, over the past two years, it was rumored that his health had declined even further. News about his admittance to hospitals in the neighboring region of Hong Kong hinted about his potentially critical condition, the latest coming in mid-
February this year, although the family always refuted the idea that Ho’s condition was serious.

FROM DANCING TO VIDEO GAMES
Apart from his qualities as a businessperson, Stanley Ho had a reputation for being a great dancer.
Occasionally he would be spotted on the dance floor in performances of the cha-cha, waltz, tango and swing.
He was also one of the known supporters of Hong Kong’s dance and arts scene and held, until his death, the patronage of the Hong Kong Ballet and the International Dance Teachers Association.
In Macau, back in 2008, the local government acknowledged Stanley Ho’s achievements and contributions to the territory by naming the road that links Avenida da Praia Grande in the center of Macau’s business district to the Macau Tower as Avenida Doutor Stanley Ho, translated to English as Dr Stanley Ho Avenue.
In a life full of events, Stanley Ho’s path is said to have served as inspiration for a movie titled “Casino Tycoon,” filmed in 1992 and starring Hong Kong’s renowned actor Andy Lau in the role of Benny, a young man fleeing Japan for Macau, who becomes the head of a gambling mafia. The film was followed by a sequel, “Casino Tycoon 2,” which gave way to a computer game version of the movie, released in 2001. 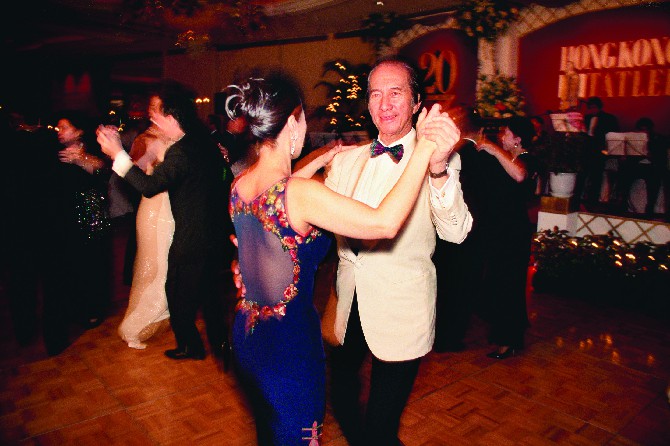 STANLEY’S TOY
At the end of “his” avenue stands one of Ho’s investments, if not gifts, to Macau, which would make it onto the list of his favorites too: the Macau Tower.
The story told about the Macau Tower is that the casino tycoon was once in the Southern Hemisphere country of New Zealand.
He spent some time in one of the country’s largest cities, Auckland, where he saw and fell in love with the city’s renowned icon, the Sky Tower, which stands on the summit of a low-rising hill in the city’s central business district.
Rumor has it that he immediately decided that he would build one in Macau, on an even larger scale. That’s why the Macau Tower, despite similarities with its New Zealand brother, is taller and possesses a larger floor area.

GOVERNMENT REACTION
Chief Executive Ho Iat Seng expressed his condolences upon Stanley Ho’s death in a statement.
The Chief Executive commended the businessman for his contributions to the community, not only commercially but also philanthropically. “He has made important contributions to the prosperity and stability of Macau,” the government head said in the statement.
Meanwhile, former Chief Executive and incumbent Vice Chairman of the Chinese People’s Political Consultative Conference, Edmund Ho, noted in a statement that he was saddened by the news of Stanley Ho passing away.
Hong Kong Chief Executive Carrie Lam issued a statement to mourn the departure of the businessman, who has throughout his life invested greatly in the city.
Referring to the magnate as Dr Ho, the Hong Kong government chief commended Ho as “of significant weight to both Hong Kong and Macau.”
“Dr Ho loved his country. He started making investments on the mainland back in the 1970s, supporting fully the country’s Reform and Opening,” Lam said. “He has energetically participated in the city’s development of social services and supported the Community Chest, as well as other charity organizations.”
“I am saddened by the passing of Dr Ho,” the Hong Kong government head added.
The Macau International Airport turned its website to grayscale to mourn its shareholder and former vice chairman.
The websites of Grand Lisboa Hotel and Hotel Lisboa have also turned grayscale to honor Ho. Renato Marques, Anthony Lam