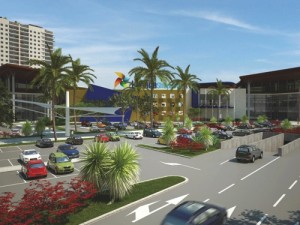 A computer-generated image of the project

Commandante Gika, Angola’s biggest building project ever and one of the largest in Africa, is expected to be inaugurated within six months, said manager Sónia Campos, cited by Angolan daily newspaper O País.
Representing an investment of over USD800 million the project includes two office tower blocks, two apartment blocks, a large shopping center and a five-star hotel.
Located in Luanda, in the Alvalade neighborhood, the project occupies a whole block and has a construction area of ​​483,600 square meters. It is expected to attract 1 million visitors per month.
With one of the office towers already in operation, the apartments in the first residential block will be delivered later this month and after following the opening of the 10,000 square-meter Kero hypermarket, the remainder of the Comandante Gika project’s buildings are scheduled for conclusion.
The project also includes a business center, the “Garde Towers,” Alvalade Residence, a housing area with 136 apartments, Hotel Vip Grand Luanda, a five-star hotel with an area of ​​72,500 square meters and 370 rooms and finally Luanda Shopping mall which, with an area of ​​276,400 square meters, will be the largest shopping center in Luanda, with six floors and three car parks.
The Comandante Gika project is the result of a partnership between the shareholders of Afripom, representing the Angolan investors, and Arrow Invest, which brings together international investors. MDT/Macauhub