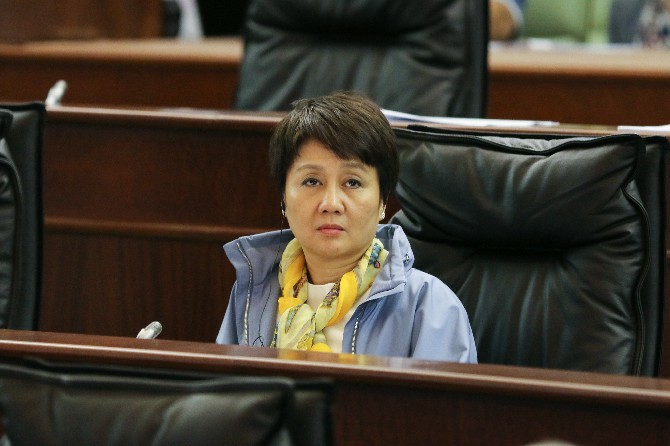 An initial inquiry from lawmaker Angela Leong prompted discussion over the responsibility for damage caused by floodwater on cars legally parked in public car parks.
In the inquiry, Leong asked the government about the lack of uniform enforcement of rules in some car parks during severe weather.
Leong explained that in some public underground car parks there is no timely placement of flood barriers and sandbags to avoid floodwater invading the car park, causing damage to numerous vehicles as recently occurred during heavy rainfall in the car park of Ferreira do Amaral Square.
In response, Secretary for Transport and Public Works, Raimundo do Rosário said that in some situations there is insufficient time for the car park staff to perform the necessary tasks.
When asked about the car parks’ management companies shirking responsibility in dealing with the damage, Rosário said that “parking either in the car parks or on the streets is the same thing. If outside, and a tree or some other object falls on the car, it is the same, but we can’t attribute responsibilities to anyone. It’s an unfortunate thing. […] This is the principle. To park cars in public car parks is no different from parking them in the street.”
This opinion did not gather consensus within the hemicycle, with several lawmakers expressing their disagreement with such a statement.
Leong Sun Iok was one of those calling for an amendment to the regulation of the facilities to “correct the flaw that allows the management companies to avoid responsibilities in cases of force majeure.” He added, “I can’t agree that parking in public car parks or in the streets is the same. These are different things and we know that if the companies assemble the barriers as they should, this can save the assets of residents. I think there is space to improve these rules.” Leong thus called for a mechanism to alert drivers of potential flooding in car parks.
Another lawmaker, José Pereira Coutinho, voiced the belief that there is a significant difference between Rosário’s example of parking on the street or in a car park, explaining that when people enter a car park, there is a “contract with the parking company to secure the cars.”Mentioning again the case at Ferreira do Amaral Square parking, Pereira Coutinho said he disagreed by saying that the reports of the incident issued by the management company are not public and only the government has access to the conclusions.
Mak Soi Kun took a very different approach, justifying the floods as divine punishment for a lack of environmental protection.
“Rain and floods are a punishment from God to us since we are not protecting the environment,” he said, adding that to prevent damages people should contract insurance agencies instead of trying to appeal to car park management companies.
The lawmaker also voiced his lack of support for Leong’s suggestion of a warning mechanism for car owners, explaining that such a warning would not come in time and could cause even more severe damage as people could lose their lives while attempting to save their cars. He recalled such occurrences during Typhoon Hato in 2017.
The government supported Mak’s opinion, noting that a warning to people would potentially cause more harm than good, adding that there are extreme and rare cases which are impossible to predict, and that people should individually assume responsibilities for the damage.