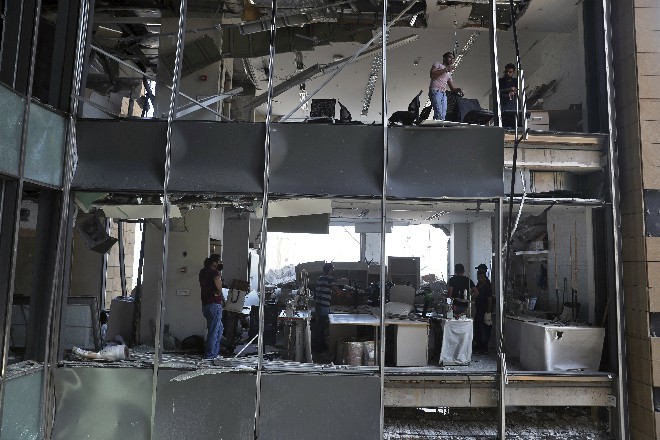 Lebanese officials targeted in the investigation of the massive blast that tore through Beirut sought to shift blame for the presence of explosives at the city’s port, and the visiting French president warned yesterday that without serious reforms the country would “continue to sink.”
The blast Tuesday, which appeared to have been caused by an accidental fire that ignited a warehouse full of ammonium nitrate at the city’s port, rippled across the Lebanese capital, killing at least 135 people, injuring more than 5,000 and causing widespread destruction.
It also may have accelerated the country’s coronavirus outbreak, as thousands flooded into hospitals in the wake of the blast. Tens of thousands have been forced to move in with relatives and friends after their homes were damaged, further raising the risks of exposure.
French President Emmanuel Macron visited yesterday amid widespread pledges of international aid. But Lebanon, which was already mired in a severe economic crisis, faces a daunting challenge in rebuilding. It’s unclear how much support the international community will offer the notoriously corrupt and dysfunctional government.
Macron, who viewed the devastated port and was to meet with senior Lebanese officials, said the visit is “an opportunity to have a frank and challenging dialogue with the Lebanese political powers and institutions.”
He said France will work to coordinate aid but warned that “if reforms are not made, Lebanon will continue to sink.”
Later, as he toured one of the hardest-hit neighborhoods, an angry crowd vented its fury at Lebanon’s political leaders, chanting “Revolution” and “The people want to bring down the regime,” slogans used during mass protests last year.
Macron said he was not there to endorse the “regime” and vowed that French aid would not fall into the “hands of corruption.”
Losses from the blast are estimated to be between $10 billion to $15 billion, Beirut Gov. Marwan Abboud told the Saudi-owned TV station Al-Hadath on Wednesday, adding that nearly 300,000 people are homeless.
The head of Lebanon’s customs department meanwhile confirmed in an interview with LBC TV late Wednesday that officials had sent five or six letters over the years to the judiciary asking that the ammonium nitrate be removed because of the dangers it posed. AP