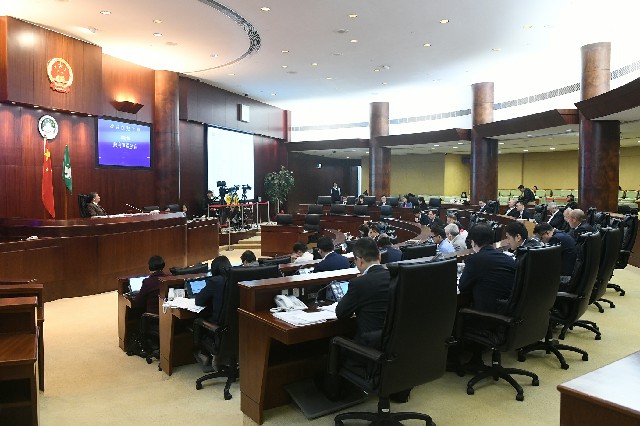 The local government intends to conduct a study on a salary increase for high-ranking officials, according to Kou Peng Kuan, director of the Public Administration and Civil Service Bureau (SAFP).
During yesterday’s Legislative Assembly (AL) plenary session, lawmaker Si Ka Lon asked about a system to hold high ranking officials accountable for their responsibilities, while lawmaker Mak Soi Kun proposed to the local government to increase the salary of high-ranking officials, more specifically, department heads.
In recent years, the local government has regularly proposed the establishment of a public administration evaluation system based on work efficiency. In Si’s opinion, the system still cannot fully reflect society’s expectations from the government.
Mak then showed his sympathy for the city’s principal officials, who, in Mak’s opinion, work more and get paid relatively little.
“A senior consultant is paid for overtime working, […] but department heads not only have to work overtime, they also don’t get paid for it,” said Mak.
The lawmaker stated that before the Macau handover, in 1999, department leaders were “really prestigious”. Mak endorsed Macau’s high-ranking officials by saying that these leaders now have to deal with more than 8,000 associations, compared to 3,000 before the handover, and they have to attend activities organized on weekends.
“They have to work on weekends. They still need family days. They still need to buy gifts for their wives, and they need money to buy gifts,” said Mak.
Mak puts high-ranking officials in the same position as ordinary civil servants, stressing that the local government is unfair for not increasing salaries of high-ranking officials at the same pace the local government increases the salary of lower-ranking civil servants.
Mak argued that high-ranking officials only have a single type of salary, whereas ordinary civil servants get various forms of compensation.
In reply to the lawmakers, Kou said that “department leaders only have a singular salary source; we see the problem. Both principal officials’ salaries and ordinary civil servants’ salaries should be adjusted. We are now studying a salary adjustment. The government has the intention to study an increase of principal officials’ salaries.”
Kou also remarked that the salary increase itself involves accountability, work efficiency assessment and other topics.
According to Kou, the local government has already finished a conclusive report on the public consultation of the civil servants regime.
BETTER ENVIRONMENT,BETTER ENTERTAINMENT
Meanwhile, the Municipal Affairs Bureau (IAM) is planning to continue improving natural and commercial environments, as well as entertainment facilities in the Seac Pai Van community.
Yesterday, lawmaker Au Kam San asked about the Seac Pai Van community, particularly about the community’s leisure space, and the suspended proposal for a hazardous items storage facility to be located there.
Government-appointed law-
maker Ip Sio Kai expressed his doubts about the fact that commercial shops at the Seac Pai Van affordable housing community are actually managed by the local government.
Ip, who is a businessman from the local SMEs sector, thinks that the commercial environment in this area is poor. “The shops are managed by the government. Rents are too expensive,” Ip said.
Ip proposed to the government to support local shops in the area by allowing other parties to manage the businesses in place of the government. This way, “people can do business, residents there have things to do, and the spaces will not be wasted.”
Lawmaker Sulu Sou wants the government’s updates on the sports field building at the Seac Pai Van affordable housing community.
Previously, the local government said that it would build a temporary sports field at Seac Pai Van. Sulu Sou remarked that a storage for hazardous items should not be located in a community where there are increasingly more residents.
Zheng Anting then complained about pedestrian facilities at Seac Pai Van, specifically decrying a lack of escalators to access footbridges, where only an elevator and stairs currently exist.
IAM representatives said that the IAM is currently responsible for one shop space in the community. All others are managed by the Housing Bureau.
The IAM plans to build more facilities to turn Seac Pai Van into an integrated community with better resources and more entertainment spaces to attract all Macau residents to use the community’s natural and leisure facilities.
At Praça de Amizade, a sports field is currently being designed. Regarding the elevator and stairs, the government representative only said that the government will consider making improvements to remove inconvenience. Moreover, no decision has been made concerning the hazardous items storage, which is still under public consultation.
In addition, the IAM expects to attract all members of the Macau public to visit Seac Pai Van in the future, when facilities connecting Alto de Coloane are completed. Regarding a new medical garden at the community, which is currently partially open to only some of the residents, the IAM plans to open the garden to all members of the public in 2020.

200 STRAY DOGSCAUGHT ANNUALLY
From 2015 until now, the IAM has caught between 200 and 300 stray dogs in Macau on average each year, an IAM representative said during yesterday’s AL.
Yesterday, lawmaker Sulu Sou asked about the possibility of relaunching the “Trap-Neuter-Return” program in Macau, arguing that the program will contribute substantially to the solution for stray animal management.
The IAM said that, in the nine-year operation of Macau’s TNR program before 2015, only 10 to 20 cat adoption cases were recorded. But, between 2015 and now, cat adoption cases increased to a total of 196.
Currently, the IAM has seven vets and 30 animal protection inspectors conducting inspections in local communities to catch stray animals.
Additionally, according to the IAM, from January to October this year, the bureau issued a total of 113 food licenses. The IAM received six applications for temporary food licenses, and the first one was issued in April this year. Two applications did not pass fire services facility acceptance inspection, two are still amending operation plans, and one gave up the application.