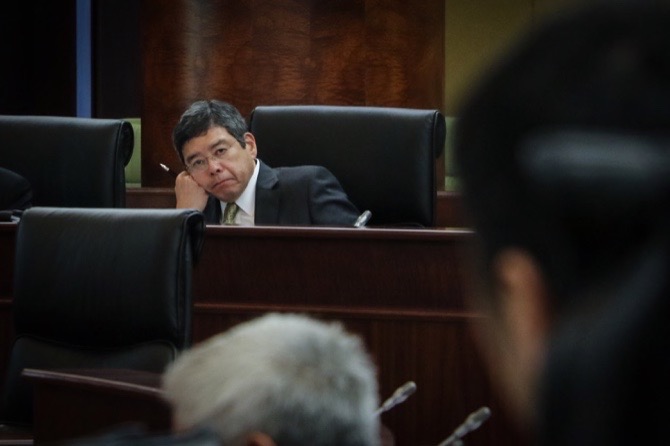 The local government is open to raising the plastic bag levy higher than the one pataca suggested in the law proposal, according to Secretary for Transport and Public Works Raimundo Arrais do Rosário, who revealed the information during Friday’s Legislative Assembly plenary meeting.

During the meeting, the government discussed the plastic bag fee bill with lawmakers.

The Secretary noted that, personally, he prefers higher fees for shopping bags, although a decision can only be made after society reaches a consensus, hinting at the need for a public consultation.

“Macau is a very wealthy place. If you ask for my personal opinion, I think we should charge more if it can yield some good effect,” said Rosário. “I don’t think one pataca will have any effect. When a consensus is reached within […] society, we will be able to increase the fee.”

The move comes as many lawmakers recently expressed their opinion that the current one-pataca charge in the proposal was too little to act as a deterrent.

Despite having proposed the bill as a step toward further environmental protection, the government received a proposition from several lawmakers, including Mak Soi Kun, Sulu Sou and Pereira Coutinho, to ban certain alternatives for single-use plastics.

Mak Soi Kun specifically pointed out that a cotton-made shopping bag or eco-bag could actually end up being more of a pollutant than single-use plastic bags, especially if they are used only a few times, before being dumped in the trash.

The lawmaker added that “the government should encourage people to reuse plastic shopping bags more times, otherwise they throw away the eco-bags after using them only once.”

Mak then opined that tourists would not bring an eco-shopping bag to a supermarket. However, the Times has discovered in interviews with supermarket staff that many visitors, especially those from Taiwan and Hong Kong, do in fact bring their own environmentally-friendly shopping bags with them.

Mak then demanded to know “why is the government letting shops make more money by giving them that one pataca?”

In addition to Mak, Sulu Sou is concerned that Macau’s environmental protection strategy will not end by passing the plastic bag fee bill. He argued that more actions need to be taken for the good of the city.

“The public should not misinterpret that, after this bill, plastic restrictions will end. Plastics are only one part of solid waste. Plastic shopping bags are only one type of plastic,” Sou noted.

“Macau is a special place,” said Secretary Rosário. “Many organizations hand out eco shopping bags. Nowadays, there is not much difference between plastic bags and eco-bags. I know that, in other places, nobody gives away eco-friendly bags; you have to pay for them. But in Macau, they are all free. We all have many eco-friendly bags because everybody gives them.”