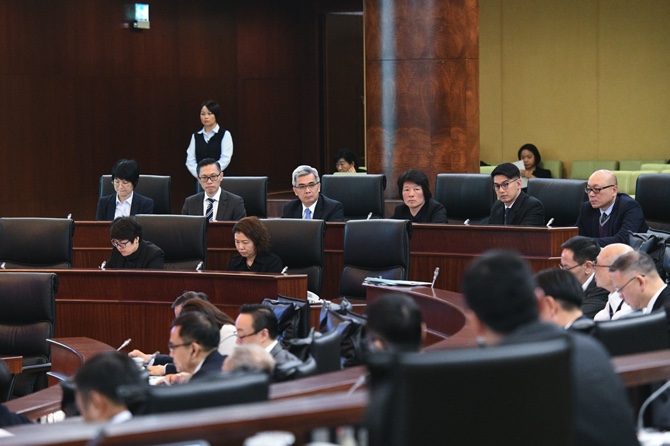 Secretary for Security Wong Sio Chak and democrat lawmaker Sulu Sou traded verbal blows during yesterday’s Legislative Assembly (AL) plenary meeting after the latter compared Macau’s undercover police officers with the Gestapo of Nazi Germany. The connotation appeared to irritate Secretary Wong, who condemned Sou’s description and remarked that the actions of the police authorities under his purview are carried out in strict accordance with the law.

Yesterday at the Legislative Assembly (AL), the Secretary appeared irritated by lawmaker Sulu Sou’s questioning over the amendment bill of Law No. 5/2006, a foundational law for the Judiciary Police (PJ).

The bill proposes that certain types of PJ employees’ appointments and information should not be revealed publicly. It would waive the requirement to announce certain police appointments, instead allowing them to remain “secret”.

The matter stirred passionate responses yesterday from both Sulu Sou and Secretary Wong.

The argument broke out when Sou, referring to the suggested non-announcement of certain police figures, attempted to draw a similarity with the Gestapo, the official secret police of Nazi Germany, as well as the KGB, the equivalent service in the former Soviet Union. The lawmaker expressed his concern that the aforementioned PJ policemen will become Macau’s “secret police”. After a round of questioning from other lawmakers, Wong prioritized addressing Sou’s remarks.

Wong claimed that “even more unreasonable” was Sou’s comparison of the PJ to the Nazi Gestapo, reaffirming that the PJ operates in accordance with the law.

“You compare the rules of protecting our colleague policemen to the secret police. This is unreasonable,” said Wong.

For Sou’s part, the lawmaker questioned Wong’s claim that national security matters are at stake in Macau and that a law must be established to handle relevant issues.

Sou clarified that he had no intention of belittling the work of the PJ and queried why the Secretary had put words in his mouth. He said that the legislation proposed by the security authorities was out of touch with public sentiment.

“The public feels that Macau is really safe, but you are making us feel that Macau will be at war at any moment. How come there is such a big difference between the actual feelings of the public and your understanding of Macau?” Sou asked.

Secretary Wong shrugged off the matter, asking why Sou consistently returns to this particular article of the Basic Law on a wide range of topics. “I really think article 23 is your demon,” said Wong.

Wong claimed that national security risks should be prevented before any issue happens. The secretary first noted that Macau has been doing “good work” to prevent national security crimes, which is exactly the reason why Macau should do even more in terms of prevention.