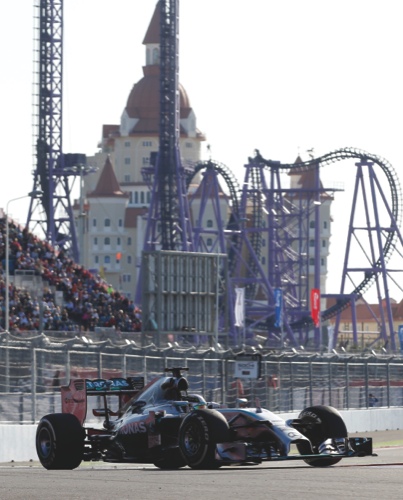 Lewis Hamilton cruised to victory in the inaugural Russian Grand Prix yesterday, leading a 1-2 finish for Mercedes that clinched its first Formula One constructors’ title and stretching his lead in the championship.
Nico Rosberg placed second despite having to pit early in the race but now trails his teammate by 17 points in the drivers’ standings, with three races remaining.
Hamilton, who was fastest in practice and qualifying, won his fourth straight race and his ninth of the season. He was presented the winner’s trophy by Russia’s president Vladimir Putin, who had pushed for his country to have a Formula One race.
“We’ve had an amazing week, Russia’s been so good to me,” Hamilton said from the podium. “It was kind of surreal for the president to be presenting the award,” Hamilton said later.
The Briton lost the pole when Rosberg beat him to the first corner. But Rosberg had to brake hard, ruined his tires, cut a corner and was then told by his team to let Hamilton back into the lead because he had gained an unfair advantage.
Rosberg replied, “I have to box because of the vibrations.”
After that, he was told by the team, “We think we need to go to the end on this set (of tires).”
Hamilton took the flag 13.6 seconds ahead of Rosberg. Valtteri Bottas was third in a Williams, 17.4 seconds back. “I was looking after the tires, managing the fuel, it was pretty straight-forward,” Hamilton said. “I really enjoyed the race and Russia has been one of my favorite races.”
Hamilton became only the fourth driver in Formula One history to win nine races in a season. He equaled Nigel Mansell’s record of 31 victories for a British driver. The other three with nine or more wins in a season were Michael Schumacher, Sebastian Vettel and Mansell.
Rosberg said he was angry at himself for making the mistake. “It was unnecessary. I braked too hard, too late. The tires were square. I thought that was the end of the day for me,” the German said. “I just messed up. But the other half of me is so happy for the team, we are dominating the sport now,” Rosberg said.
Bottas kept close to Hamilton until he began to lose pace about a third into the race. “The rear tires started to lose pace and then Nico got me, I didn’t expect him to come from inside in turn one,” the Finn said.
A ceremony to open the circuit included Cossack dancers with sabers and javelins and Russian Air Force jets drawing hearts in the sunny sky with their jet streams.
The Sochi Autodrom in this Black Sea resort was built around the Olympic Park used in February during the Winter Olympics, another project personally supported by Putin.
Also before the race, the drivers united to send a message of support to their injured colleague Jules Bianchi, who is fighting for his life following an accident at the Japanese Grand Prix one week ago.
The 21 drivers gathered together shortly before the start of the inaugural Russian Grand Prix on the grid and were joined by Formula One chief Bernie Ecclestone and international federation president Jean Todt.
They stood behind the words “Jules, we are all supporting you” inscribed into the grid.
Ecclestone later welcomed Putin as the Russian president arrived at the circuit about one hour into the race.
The ninth 1-2 for Mercedes this season is one short of McLaren’s 1988 record.
There are 100 points at stake in the last three races of the season — in the United States, Brazil and the double-pointer Abu Dhabi. Nesha Starcevic, Sochi, AP