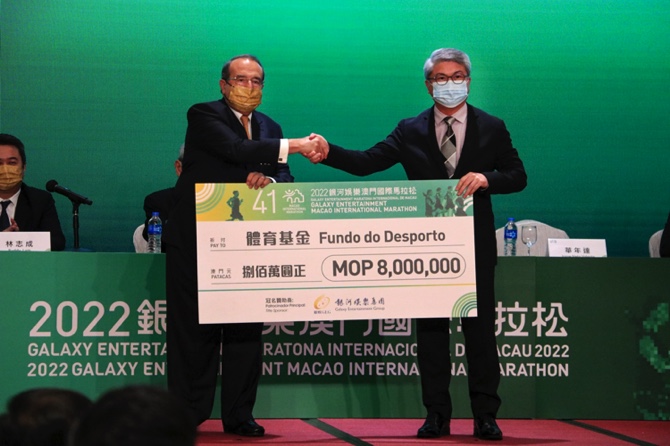 The 41st Macao International Marathon will take to the streets of Macau on December 4 in a format practically transposed from last year’s event, the organizers said yesterday in a press conference to launch the event.

The president of Sports Bureau (ID), Pun Weng Kun, highlighted the long-time commitment of the sponsor – Galaxy Entertainment Group (GEG) – to the event, which has lasted 19 consecutive years, in the press conference that took place at the Banyan Tree hotel yesterday afternoon.

Pun also noted that the recent changes in the city’s urban development have presented new challenges for the organization and the determination of routes to be followed for the full marathon distance (42.2km), the half-marathon (21.1km), and the mini-marathon, which will be 4.5km this year.

The president of the General Association of Athletics of Macau, Lam Hin Fu, said staff training and course preparation works have already begun to ensure the event runs smoothly, as in other years.

Lam Hin Fun said the support team this year will count on the help of over 1,000 members, who will also help to ensure that all the health-related protocols are strictly followed.

Representing the title sponsor, senior vice president of the corporate office of GEG, Buddy Lam, noted the brand’s commitment to the development of sports and sporting events in Macau over the years. He also said GEG will continue to promote the event through several events and initiatives. GEG is this year arranging a special promotional package that will allow participants to stay at the Galaxy Hotel at an affordable price, adding that it is also supporting the ID’s promotional campaigns of the event in the Greater Bay Area cities to attract more participants and visitors to the competition.

Group advisor of GEG, Jorge Neto Valente, presented a check of 8 million patacas to Pun related to the sponsorship of this event, at the press conference.

12,000 athletes expected to run in December

A total of 12,000 entries will be made available for the registration of athletes of all levels and the three racing distances, with the larger portion (5,800) reserved for the mini-marathon, 4,800 entries being available for the half-marathon distance and the remaining 1,400 for the full marathon.

On the race day (December 4), participants for the marathon and half-marathon distances will hear the starting pistol at 6 a.m., while those for the mini-marathon will start to run 15 minutes later.

As in the 2021 event, participants will have to present a vaccination proof of completion of the primary vaccination scheme for Covid-19 (2 doses) by November 20 (14 days before the competition) as well as undergo a nucleic acid test (NAT) before the event day and with a validity that includes the day of the competition. Participants must arrange and pay for this NAT.

The proof of vaccination will have to be presented at the BIB collection counter set up at Broadway Macau between November 27 and December 3.

In last year’s event, which was affected by the border restrictions that only allowed the entry of athletes from the mainland, the organizers still noted that the event had participants from 29 different countries and regions, the large majority of which were people living in Macau.

On the sidelines of the press conference of the 41st edition of the Macao International Marathon, president of Sports Bureau (ID), Pun Weng Kun, said he hopes Ethiopian or Kenyan athletes (the most successful participants in the past) can still join this year’s event, noting that quarantine requirements have been reduced from previous 14 to ‘7+3’ days.

However, both countries are not included in the list of 41 countries which Macau has authorized reentry from early this month.

As for the invited athletes, Pun admitted that invitations from organizers was “focused on the athletes from mainland.”