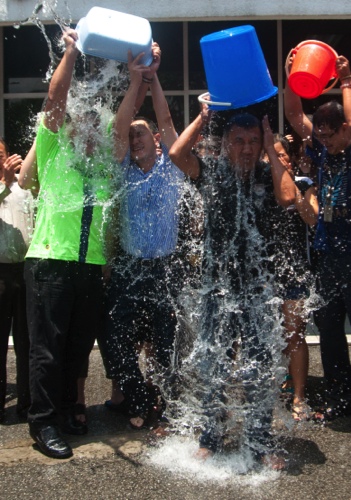 Numerous individuals all over the world have taken up the so-called Ice Bucket Challenge, which has gone viral in recent weeks. This chilly trend has finally made its way to Macau, with more and more people posting videos on social media that show them dumping cold water on themselves for a heart-warming reason.
The challenge requires individuals to dump a bucket of ice water on their heads, or make a donation to charitable organizations, before challenging others to do the same. It seeks to promote the awareness of the neurodegenerative disease called amyotrophic lateral sclerosis (ALS).
The Times has spoken to several Macau residents, who explained why they joined the charitable course.
“I did it for fun,” said Deco Lui, a local resident in his 20s. He posted a video on Facebook of him taking the challenge on August 22.
Mr Lui revealed that he has made a donation to the non-for-profit organization, ALS Association, in the United States as well. Nevertheless, he said that he did not know the specific details of the ALS disease, and had not tried to look it up.
He thinks that the challenge is meaningful because it can help to raise awareness ALS, as well as help the patients.
He said that, among the three friends he has challenged after dumping the bucket of ice water on himself, two of them have already responded.
Another local resident, Mr Chan, posted the challenge video on Facebook on August 18.
He has made two donations – one to the ALS Association and another to Oxfam for the organization’s drinking water project.
Mr Chan said that, judging from the amount of donations, he believes that the activity is helping to combat ALS. He also said that he has spent some time learning more about the disease.
Meanwhile, local mobile service provider China Telecom (Macau) has posted on Facebook its version of the Ice Bucket Challenge.
The company said that if individuals added the Chinese words “China Telecom (Macau) Ice Bucket Charity Relay” in the message alongside their Ice Bucket Challenge video on August 28, it will donate MOP100 to the ALS Association.
While some comments have applauded the activity, others have accused the company of using the charitable course to conduct a commercial promotion.