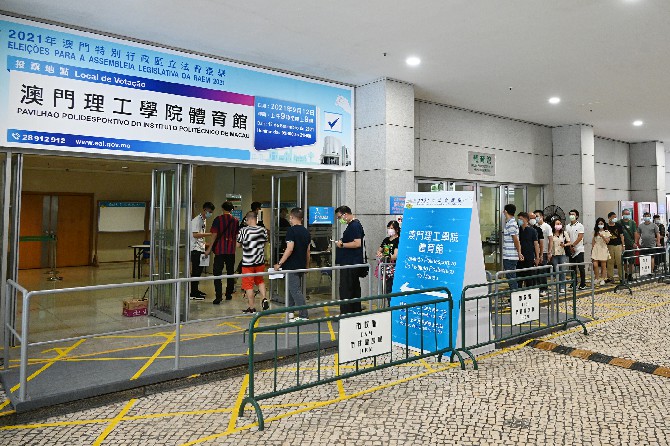 In what was deemed a reasonably predictable election, there were still a few surprises.
Aside from the lowest voter turnout since 2001, the wins and losses of some candidates have alarmed some watchers.
Commentators agreed that most, if not all, pro-democracy supporters abstained from voting by not casting ballots or voiding the ballots they did cast.
In early July, the electoral committee announced that 21 aspiring candidates in six groups for this year’s Legislative Assembly (AL) election were disqualified due to “factual evidence” proving that they neither support Macau’s Basic Law nor are loyal to the Macau SAR.
The announcement was a surprise to the disqualified candidates and also sparked criticism from the public.
The verification of election ballots on Monday revealed there were several ballots containing inappropriate drawings and words which expressed strong opposition toward the elections.
One of the ballots contained a shape that formed the letters “DQ,” which stands for disqualified.
Political expert, Eilo Yu, admitted, “Yes, the result surprised me,” noting that “the effect of the disqualification is more severe than expected.”
“Besides, the low turnout rate might be also contributed to by non-prodemocracy supporters. If all the supporters of the four pro-democracy candidate lists who voted in 2017 had not come out last Sunday, the turnout rate [would have dropped] about 10%,” said Yu, who is an associate professor of the Department of Government and Public Administration at the University of Macau.
Lawyer-cum-political scientist Sérgio de Almeida Correia noted that considering the events which occurred prior to the election’s exclusion of candidates under “very questionable grounds, not to mention illegal ones,” there were three possible explanations for the results of the September 12 elections:
First, voters may have chosen to maintain the status quo: going to the polls turning a blind eye to previous events, supporting the government and all previous administrative and judicial decisions to exclude pro-democracy activists.
Second, voters may have decided to vote without having a preferred candidate.
Correia’s final option was that voters may have expressed their discontent by voting null or blank.
“I think that what happened was a combination of the second and third hypotheses,” Correia told the Times.
“What happened was exactly the opposite of what the government asked of the population, meaning that the turnout was the lowest ever since colonial times, and blank and null votes doubled or tripled the figures of previous elections,” the expert calculated.
For him, the results came as a “resounding defeat for the government and for the political forces supporting the exclusions.”
“This is the conclusion that has to be made.”
Candidate exclusion ‘not smart’
The exclusion of candidates and associations played a major role in the record low voter turnout.
The elections for the seventh Legislative Assembly registered the lowest turnout rate ever, with only 42.38% of voters showing up at polling stations.
Sonny Lo, veteran political commentator, expressed that the low turnout showed “many young voters did not vote because of the disqualification of so many candidates.”
For Correia, the “exclusion decision was not, politically, very smart.”
“The disqualification explains the brutal increase in the number of blank votes and null votes, despite the reduction in the number of voters,” said the expert.
In the 2001 elections, the voter turnout rate was 52.34%; while in 2005 it was 58.39%. In 2009 it was 59.91%, in 2013 it was 55.02%, and in the last elections of 2017, it was 57.22%.
To better understand the fall in turnout, the total number of eligible voters in 2017 was 305,615, 174,872 of whom voted.
This year, the size of the electorate reached 323,907 registered voters, corresponding to 137,279 votes cast in a ballot box. With 18,292 more registered voters, 37,593 fewer people voted.
In press briefing held on Sunday after the closing of the polling stations, president of the Legislative Assembly Electoral Affairs Commission (CAEAL), Tong Hio Fong, blamed the pandemic for the low turnout.
However, Correia did not find this explanation convincing, citing the absence of local cases.
In 2017, there were 944 blank votes, and the null votes were 1300. In 2021, they were 3141 and 2082 respectively.
Therefore, he believed that the increases are certainly not explained by the fear of the pandemic, nor by the heat, “because these people took to the trouble of going to vote and voting blank or null despite the efforts that were made to avoid it.”
“If we look at the figures, we realize what a turnout disaster these elections were. In fact, the numbers of voters in the previous election (2017) on the lists of Ng Kuok Cheong, Au Kam San and Sou Ka Hou amounted to 30,673,” said Correia.
“Now, compared with the results of the 2017 elections, it appears that the number of people who voted for the lists of the three excluded is much lower than the number of those who did not even go to vote.”
The political scientist also refused to interpret the increased number of votes for José Pereira Coutinho’s New Hope list as a victory for the government. Coutinho, he believed, was “the only [lawmaker] whose proposals systematically failed in the Legislative Assembly” as part of the government’s success.
Coutinho secured two seats at the AL with 18,232 votes, which is 3,846 votes more than he received in the previous election.
He was alongside traditionalists Si Ka Lon and Ella Lei in winning the three highest vote tallies.

Appeal to vote didn’t work
On the election day, the Chief Executive, with the city’s five Secretaries, appealed to citizens to exercise their right to vote and fulfill their civic duty.
However, the massive appeal for participation made by CAEAL seems to have had no effect.
According to Correia, from a political-electoral point of view, the low turnout and the high number of null and blank votes in direct suffrage are a “perfect disaster for the establishment.”

Agnes Lam’s defeat a surprise
The defeat of Agnes Lam was also unexpected. According to Yu, the disqualification of the pro-democracy candidates did not benefit centralist candidates like Agnes Lam and Ron Lam.
“The disqualification may anger the centralist supporters. Certainly, Agnes’ defeat may also imply that her approach and political position in the past four years did not convince her supporters who may feel angry about the disqualification,” said Yu.
Agnes Lam was the only candidate not re-elected, gathering only 3,729 votes, whereas Ron Lam won 8,763 votes.
However, according to Yu, Ron’s share might not have secured his seat if the democrats had run in the election.
“I would also say that the disqualification did affect the two Lams, instead of benefiting them, while the impact seemed to be much bigger on Agnes, probably because of her [checkered] record in the past four years, said Yu.
Correia echoed similar sentiments, noting that voters believed Agnes Lam should not remain in the AL following her preceding four years.
He added that Ron Lam fought a good campaign and spoke on important issues that interested the entire population, many of which were also addressed by Agnes Lam.
For Lo, Agnes Lam suffered from the reluctance of her supporters to vote, while Ron Lam relied on his hard work in the past as he gained 1,500 votes more this time compared to his last candidature.
“Lam was defeated as her mobilization ability was no match with other traditionally pro-government and pro-Beijing groups,” said Lo.

Three seats expected
The Fujianese group led by Si Ka Lon seems to have benefitted from the disqualification, as well as the retirement of Melinda Chan and Angela Leong’s move to the indirect elections, according to Yu.
By comparing the number of votes received by Si Ka Lon and Song Pek Kei in 2017 and 2021, the Fujianese group received 26,593 this year, an increase of 1611 votes from the 2017 election in which Si and Song ran in two separated lists.
“These extra votes may be from Leong and Chan’s supporters. Nevertheless, the numbers of votes for other candidate lists from traditional social groups increased more than the Fujianese group,” Yu explained.
Lo added that Si’s group was strong in the past and so, through electoral mobilization of voters, it could get three seats.
“[It’s] a result that was not surprising at all because voters’ mobilization has traditionally played a critical role in shaping the success chance of political groups running in elections.”
Correia added that “due to ‘external interference’ in the rules of the game, anything is possible.”

Thinking deep
Li Sheng, professor of Political Economy and Public Policy at the University of Macau, said that the pandemic has prompted AL candidates to think more deeply on how to improve the social welfare system in the process of internationalization of Macau.
This means that candidates must take public opinion into account when constructing the public health and safety system from the practical point of view, and also develop a sense of moral accountability based on procedural accountability.
The effects of the pandemic, such as the economic downturn and the distribution of social resources have allowed voters to pay more attention to how the government can effectively find a balance between fighting the pandemic and boosting the economy.
“Thus, the pandemic is likely to create a Legislative Assembly with a good sense of moral responsibility for society and a community that will […] cooperate with the implementation of public policies,” said Li, who is also the associated dean (Academic Affairs) of Faculty of Social Sciences.
For Correia, the people have shown dissatisfaction with the choice of candidates and with the current political system.
“What became more evident is this moment of economic and social crisis that Macau is going through,” he added.